So this blog has been away a lot longer than I originally intended!  Much of August was a proper "switch off", away from the laptop, less time on the phone, and although I had great plans to read more books, it didn't quite happen (although I'm two thirds of the way through The Authority Gap: Why Women Are Still Taken Less Seriously Than Men And What We Can Do About It, which I'm thoroughly enjoying and would recommend for anyone looking for some non-fiction).  I also listened to almost no music for the month of August, I went for walks without headphones for possibly the first time since I got my first Walkman in the eighties.  The three songs I did seek out over the summer, however, were: Beyoncé's 'Break My Soul - The Queens Remix' with Madonna, PJ Harvey's cover of Leonard Cohen's 'Who By Fire' from the TV series Bad Sisters and First Aid Kit's cover of Don Henley's 'Boys Of Summer'.  I'm classing them all as eligible reissues so have added them to the Reissues By Women Spotify playlist.

The regular readers amongst you will notice that this is not a Tuesday, and there are a number of reasons for that.  Partly because it took me a bit longer than I had planned to get back into the swing of things after my break (it's already mid-September...).  But also, because although this marks the return of the blog after the summer break, the blog is not actually going to be coming back on a regular basis. In a nutshell, after a period with significantly reduced commitments, I discovered that maybe a reduction in commitments might be something to think about more generally and I've decided to make some changes to how I am using my time.  This blog was a lockdown project, and I have absolutely loved how it has helped change my thinking towards a more diverse attitude in seeking out music.  But two years on from when I first had the idea for Reissues By Women, and with lockdown over (I hope), I am increasingly less at home, and I am increasingly interested in spending a bit less time on my laptop or my phone.

So with that in mind, I wanted to do a bit of a round-up of things happening at the moment, both recently out and soon to come, as well as a few longer-range things that have just been announced, before this blog goes into some kind of hibernation. 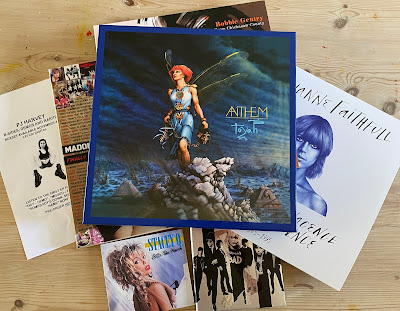 Those who follow me on Instagram may have seen that I shared an early glimpse of the Blondie Against The Odds 1974-1982 box set that came out last month, and recalled a little mini-rant from the end of last year about how few big box sets get made for female artists.  And I was most excited to see this comment in response:

Well 'around the corner' is here, and that box set is the Anthem super deluxe edition by Toyah which was out last Friday.  Team Toyah/Cherry Red very kindly sent me an advance copy and I spent last weekend unboxing it.  And the most crucial thing to say here is that in almost two years of writing this blog, there have been extremely few albums by a woman getting such in-depth treatment and a box of this size (because let's face it, size does matter).  The Blondie box set spans six years and six albums.  Joni Mitchell's forthcoming collection The Asylum Albums spans three years and four albums.  Last month's Madonna box set spans four decades, the PJ Harvey box set that I'm going to write about next spans three. And in last year's 'top 50 box sets of the year' list there was only one album-focussed box set by a female-fronted artist (Beautiful Garbage by Garbage) in comparison to the many, many by men. 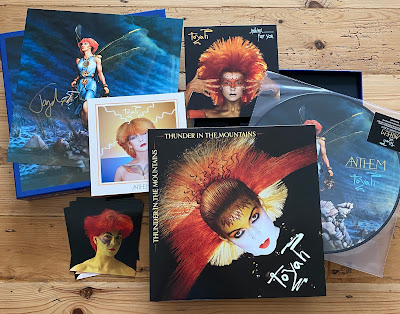 So this is really quite the special thing - and Anthem has such a variety of elements within this box - three CDs (with 45 bonus tracks if my maths is correct), a DVD of archive footage, the album on picture disc,  'Thunder In The Mountains' mini LP on splatter vinyl, a 7" of 'Sphinx'/'For You' on orange vinyl, plus a book of lyrics and anecdotes, art cards - and my absolute favourite extra (and I did actually gasp on behalf of the 1981 six-year-old when I saw it in the box): a 12" print signed by Toyah Willcox.  It's pretty immense to put it mildly, and befitting of the album that spent 46 weeks in the UK charts and includes the iconic top ten singles 'I Want To Be Free' and 'It's A Mystery' that are such anchor points of the 80s - as illustrated by the Twitter response from KT Tunstall to Toyah this week as both women were in the UK midweeks top ten.  I know that this box set is one that I am going to be holding up as an example of what to be striving for for some time to come. 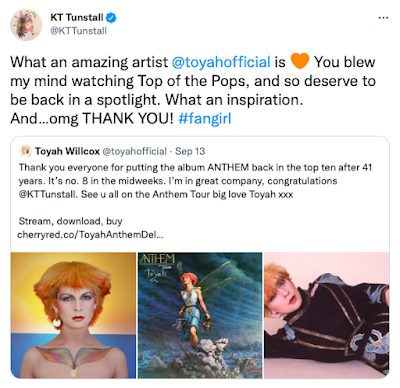 And the Toyah reissues don't stop there - just announced is Live At The Rainbow, out on 25th November.
Announced at the end of last week was a new collection by PJ Harvey following the completion of her reissue and demos series which came to an end about six months ago.  B-Sides, Demos & Rarities is a 59-track collection, covering the period 1991 to 2019, with exactly what the title suggests.  Fourteen of the tracks are previously unreleased, none of them are included (at least not in the same version) on the reissue and demo series releases, and most are currently unavailable digitally.  The first three advance tracks are 'Dry - Demo', 'Missed - Demo' and the b-side to 'Down By The Water' - 'Somebody's Down, Somebody's Name', out digitally now.  The full collection is available as a 6LP or 3CD set, or digitally, and will be out on November 4th. 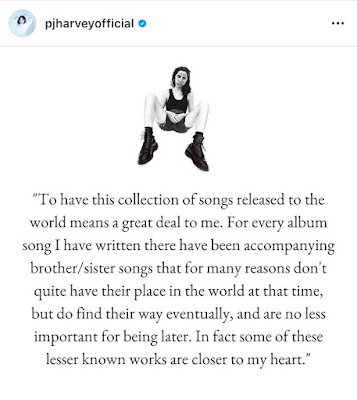 I got a preview of the Marianne Faithfull retrospective Songs Of Innocence And Experience 1965-1995 that comes out tomorrow.  It's a really elegant package, by the same team that look after the Bobbie Gentry reissues and the same detail and care is very much evident here - with the annotations about each of the tracks' availability (including five unreleased) and the extensive liner notes by Andrew Batt about the period in question.  The songs, twenty-eight in all, have been remastered from the original tapes, and include covers of 'Yesterday' and 'The First Time (Ever I Saw Your Face)' as well as her legendary debut single 'As Tears Go By'. 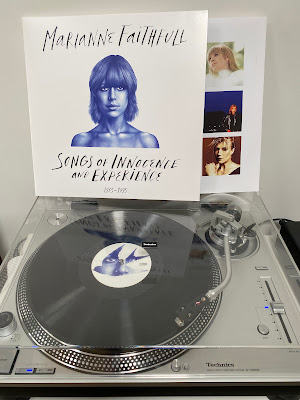 And also out tomorrow is the 2CD deluxe reissue of Stacey Q's debut album Better Than Heaven from 1986.  This slice of mid-eighties pop has been expanded with a host of remixes including of the single 'Two Of Hearts' and the US Dance number one 'Insecurity'. 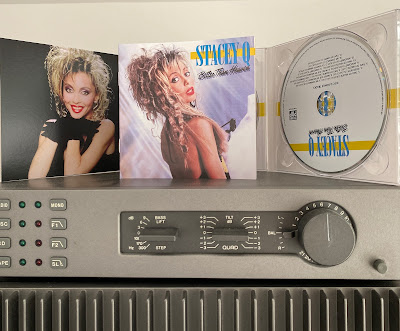 Speaking of US Dance number ones...Madonna's 50 Number Ones: Finally Enough Love compilation came out while the blog was on holidays, and hot on the heels of it comes an announcement this week about a reissue of the 1992 cancelled Erotica picture disc, to mark the 30th anniversary of that album.  The three-track single, with artwork based on an image from her Sex book, is out on 21st October, but Madonna collectors are quite the force so I can't help wondering if most of the copies will be snapped up pretty quickly already on pre-orders.  And she's got a remix of 'Hung Up' out digitally tomorrow, and a 40th anniversary reissue of her debut single 'Everybody' is on the Black Friday list announced yesterday. 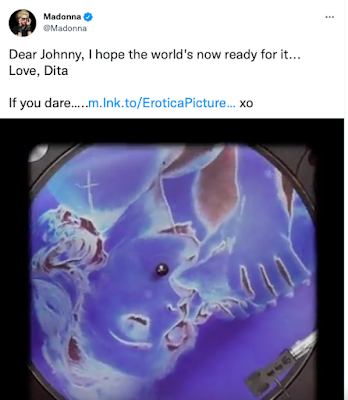 Other things to look out for in future weeks are:
Joni Mitchell's The Asylum Albums (1972 - 1975) - remastered versions of her albums For The Roses, Court And Spark, Miles Of Aisles & The Hissing Of Summer Lawns (23rd September).
The Marine Girls Lazy Ways / Beach Party - both of their albums on one CD, repressed on 14th October.
Siouxsie And The Banshees All Souls - a collection of classics and rarities personally curated by Siouxsie (21st October).
Digital listening this week has included Norah Jones' cover of Leonard Cohen's 'Steer Your Way' for a new multi-artist Cohen compilation and the new version of Dolly Parton's '9 to 5' featuring Kelly Clarkson, as well as Bjork's Sonic Symbolism podcast - a series of episodes, each focussing on one of the ten albums in her catalogue.  Highly recommended, engaging and easy listening at the same time.
And so that's it.  For now at least.  A massive thanks to those of you who have read, commented, shared, contributed and encouraged.  Stay in touch...!