It was Cassette Week this week.  Cassette Week was a new initiative for 2020 to celebrate the much-loved format, following the cancellation of Cassette Store Day as a result of some pretty serious and grim controversy surrounding some of the organisers earlier in the year.  Cassettes were the first music format that I collected, and I am proud to own a working cassette player, but it's actually boxed up in my shed due to some rejigging of my house in recent months.  And as much as I knew that the right thing to do would be to order a cassette and get the cassette player out of the shed and find a new place for it in my house, I simply didn't do it.  The cassette I would have bought if I hadn’t been so lazy was L7’s Smell The Magic on Sub Pop Records, out this week as part of the 30th anniversary reissue of the album.  Luckily, it has recently been reissued digitally too in recent weeks so I checked it out on Amazon Music in Ultra HD instead.  Like many who were teens in the early '90s, I was quite partial to a bit of grunge and I absolutely LOVE the L7 song (anthem?) 'Pretend We’re Dead' from their 1992 album Bricks Are Heavy.  And yet, I have never listened to a single other song in their catalogue.  So this seemed like the opportune moment to rectify that.  And I can confirm that Smell The Magic didn’t disappoint and I have played it most days this week. Favourite song is the album closer - 'American Society'.  Maybe because the main riff is like a slightly slowed down version of 'Pretend We’re Dead', in fairness.  But I also loved the lyrics questioning the need to conform to what American society of the '90s stood for. I’d insert some analogy relating this to the current US presidential campaign here if I was clever enough to come up with one. 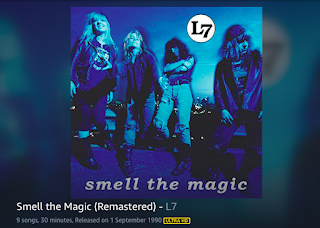 Cassette-purchasing-laziness aside, I did order two albums on vinyl this week, and neither has arrived at the time of writing (countless rings of the doorbell and me jumping up saying “ooh, it must be my records” were fruitless).  I might need to rethink the ordering/listening/writing timeline of this blog.  Luckily both of these are available digitally too and rather than hold them back until next week, I’m going to talk about the music regardless right now and I’ll follow up with photos and thoughts on the packages on Instagram during the week.
First up is Ella Fitzgerald’s Ella: The Lost Berlin Tapes (Live).  Released digitally and on CD by Verve Records a couple of weeks back, the vinyl format is just out this week.  This is a concert performance from 1962, which was recorded at the time, but as the album title suggests, the tapes were subsequently lost.  Recently unearthed in the private collection of Verve Founder (and Ella’s manager) Norman Granz, they have now been released some 58 years later.  Ella’s release from her show at Berlin’s Deutschlandhalle in 1960, was the Grammy-winning Ella In Berlin: Mack The Knife where she famously improvised the lyrics to the Weill/Brecht composition.  This show, from the city’s Sportpalast two years later, features a different set, including standards such as 'Cheek To Cheek', 'Cry Me A River' and 'Someone To Watch Over Me', as well as 'Summertime' and another go at 'Mack The Knife'.  There’s always a risk with ‘lost’ recordings that they were not released at the time for good reason, but not the case here.  The album was number 1 in the US Current Traditional Jazz charts this week, and deservedly so. 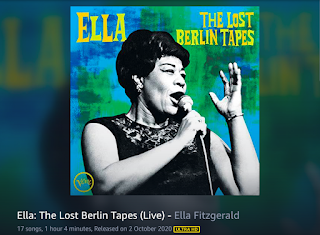 Next on my list of awaited vinyl is Madeleine Peyroux’s Careless Love - reissued on red vinyl by Rounder/Concord this week as part of a collection of limited edition coloured vinyl releases available via thesoundofvinyl.com.  Careless Love was originally released in 2004, and was a top ten hit in the UK (and purchased on CD at the time by yours truly).  It’s a collection of covers of songs by the likes of Bob Dylan ('You’re Gonna Make Me Lonesome When You Go'), Hank Williams ('Weary Blues') and Leonard Cohen ('Dance Me To The End Of Love'), plus one original song written by Madeleine along with Jesse Harris and the album’s producer Larry Klein - 'Don’t Wait Too Long' - which sits very comfortably here.  Madeleine has also released a new single this week - called 'American'.  30 years after L7 said they didn’t want to drown in American society, Madeleine asks her listeners ‘what does it mean to be American’?  Something tells me this is going to be a big theme for the next few weeks…

I also spotted Janet Jackson’s Janet, on clear vinyl (UMC/EMI), in the batch of coloured vinyl reissues this week.  Originally released in 1993, it set a record for the highest first week sales of an album by a woman in the US at the time, and features hit singles including 'That’s The Way Love Goes' and 'Whoops Now'.  The song that jumped out at me when I gave the album a listen this week was 'New Agenda' (which features Public Enemy’s Chuck D), and I’ll admit to having my head in my hands in a gesture of despair at the lyrics ‘Because of my gender, I’ve heard no too many times.  Because of my race, I’ve heard no too many times’.  Hard not to feel that little has changed in the 27 years since this was written and that the "new agenda" Janet says was due in 1993 is now very long overdue in 2020. 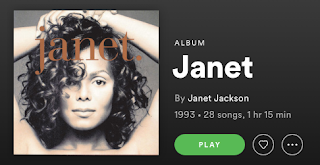 Norah Jones reissued her most recent album Pick Me Up Off The Floor as a an expanded digital deluxe edition this week.  The bonus material includes a new song ‘Light Wind Blowing’ plus 17 of her ‘live from home’ performances recorded in March to August of this year.  The earliest of those performances is a cover of 'Patience' by Guns N’ Roses from 19th March.  'Patience' was a song that many a teenage girl had on mixtapes for their walkmans (walkmen?) in the ‘90s.  Norah’s is a beautiful take on it, and it would be perfect dinner party music for those now-grown-up teenage girls if dinner parties weren’t currently banned.  The other standout track for me is ‘Nightingale’, being a big fan of Norah’s debut album Come Away With Me (me, and 27 million others). 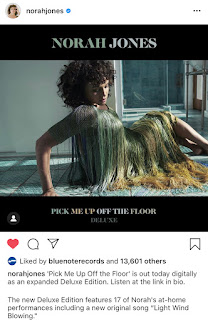 In my updated Spotify Release Radar on Friday, I discovered an acoustic version of Dubstar’s 'Not So Manic Now', a song I first discovered on their debut album Disgraceful in 1995.  The acoustic version is part of a new single which features a cover of The Beatles 'Free As A Bird' as a b-side, a nod to John Lennon’s 80th birthday, it seems. 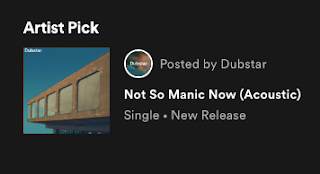 Other reissues out this week include a 40th anniversary reissue of Donna Summer’s The Wanderer, and Kiki Dee: The Fontana & Motown Years, a 3CD collection by Demon which includes a version with a limited edition signed print.
This week’s moment of talking about things that are not strictly reissues is to say that I have been really enjoying In Memory Of My Feelings by Catherine Anne Davies (aka The Anchoress) and Bernard Butler.  In fact, the inclusion of a cover version of Madonna’s 'Live To Tell' is probably plenty to justify it being talked about here, and I’m also reminding myself that I don’t need to justify talking about things in my own blog.  I particularly love the song 'Ten Good Reasons', but the whole album (released this week via Needle Mythology) is really superb and worth checking out.
The Reissues By Women Spotify playlist is updated here with a selection of this week's favourite songs.
No idea yet what next week’s listening will bring.  Living life on the edge here…