Utterly sublime.  That is my verdict on the Sade 6-album vinyl box - This Far - that was released this week by Sony. I pre-ordered it last weekend direct from the Sade store - it arrived before lunchtime on Friday and has dominated the record player since.  The Best Of Sade was one of the first CDs I ever owned, and I played it on repeat on my Sanyo CD player through much of the mid-'90s.  When Lovers Rock came out in 2000, I added that to my collection.  But the rest of the studio albums remain ‘new’ to me.  There have been a number of in-depth articles about Sade in the media this week, including by Dylan Jones for GQ and Alexis Petridis for The Guardian, so I’m not going to go into a big history or song rundown here as they’ve got it covered.  In a nutshell, Sade (the band) are fronted by Sade Adu (the singer) who is one of the most successful female singers in British history, and their debut album Diamond Life is one of the biggest selling debut albums of the 1980s in the UK.  It was followed by 5 other multi-platinum selling albums.  What I can certainly say is that there is significant pleasure to be derived from spending a drizzly weekend in October listening to the 58 songs in this set from start to finish.  The album packages have been recreated from the originals, and the recordings have been mastered in half-speed by Abbey Road’s Miles Showell.  If ever there was a person for precision, that is Miles, and the records really do sound absolutely breathtaking.  I was also mightily impressed by the attention to detail on the packaging (designed by Hingston Studio) - right down to the different paper stocks and different style thumb cuts on the inner sleeves.  I honestly don’t think I have seen that level of detail across a set of reissues before (I need to up my own game!).  It’s definitely a luxury item - mine was paid for by the refund I never thought I’d get from Ryanair, following to the cancellation of my Easter flights, which finally turned up last week (thanks Michael O’Leary!) - but as a casual fan who’d never gone deeper into the catalogue than two CDs a couple of decades ago, it has brought nothing but delight.  However, Spotify users can also enjoy the songs in the box set digitally via this handy artist playlist.  It was no mean feat to choose a selection of highlights for my own Reissues by Women playlist - but I limited myself to one per album and in the end I went for 'Smooth Operator', 'The Sweetest Taboo', 'Paradise', 'No Ordinary Love', 'King Of Sorrow' and 'Bring Me Home'. 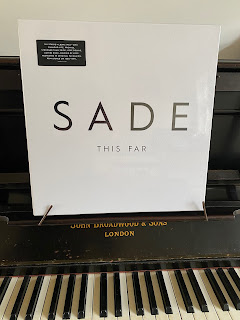 The early part of this week was spent listening to The Rarities by Mariah Carey, a 15-track compilation of “fan favourites, rare songs and long-forgotten gems” as Mariah herself describes them in the notes in the CD booklet, spanning three decades of her career to date (released on Friday 2nd October).  The set opens with ‘Here We Go Around Again’, a previously unreleased song from the sessions for her eponymous debut album in 1990 and it includes a little quip from Mariah at the end of the track where she says “the end of that was iffy”.  I like to think that I have heard my fair share of b-sides and rarities over the years, and for something that got left behind, this one really is far from iffy.  The collection is curated in chronological order, with the last two tracks taking us right up to date. The penultimate, titled ‘Saves The Day’, was something Mariah started writing some years ago but finished recently for The Rarities project.  It features Lauryn Hill and that iconic hook from the Fugees’ 1996 version of ’Killing Me Softly With His Song’.  Oh, and the disc also includes that controversial original version of 'Loverboy' featuring the sample of Yellow Magic Orchestra's 'Firecracker'.  A second disc presents the previously unreleased live album from Mariah’s first Japanese tour in 1996 where she played at the Tokyo Dome as part of her Daydream World Tour, and includes a superb cover of The S.O.S. Band’s ‘Just Be Good To Me’.  As an aside, I’ll admit I had to google the name of the original artists who released ‘Just Be Good To Me’, and I was delighted to see my good friend Daryl Easlea quoted on the Wikipedia page for the song as having described the original as “a barnstorming electro-soul anthem”!  Also featured is an almost 6 minute extravaganza of ‘Anytime You Need A Friend’ as well as hits like 'Hero', 'Vision Of Love', 'Dreamlover', 'Fantasy' and 'Always Be My Baby'.  The Rarities coincides with the release of Mariah’s memoir The Meaning Of Mariah Carey as well as the start of a series of vinyl releases of her 16 albums on vinyl.  Hashtag MC30. 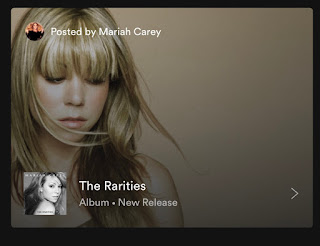 It was National Album Day in the UK this weekend.  This year is the third year of National Album Day, originally set up to mark 70 years of the album format back in 2018.  This year the theme is the ‘80s and I noticed with admiration that of the ten ‘ambassadors’ for National Album Day, half were female artists - Carol Decker, Kim Wilde, Ward Thomas, La Roux and Toyah Wilcox.  Less gender-balanced were the artists in the series of special limited edition National Album Day coloured vinyl releases this week, but I was nonetheless keen to pick up a copy of Cyndi Lauper’s She’s So Unusual on red vinyl.  First released in October 1983, this is Cyndi Lauper’s debut album and it won her the Grammy award for Best New Artist.  It spawned 6 singles in all at the time, and contains the mega-hits 'Girls Just Wanna Have Fun' and 'Time After Time'.  Sadly, my red vinyl hasn’t arrived at the time of writing!  I did however avail of one of my digital music subscriptions to have a listen to the album instead.  I remember so vividly when 'Girls Just Wanna Have Fun' came out - and the 8-year-old me dancing around and yelling it at a Christmas disco in a school hall in 1983, in my C&A outfit, with my best friend, really believing that mantra and being delighted that a clever woman had made a point of writing a song out about it. 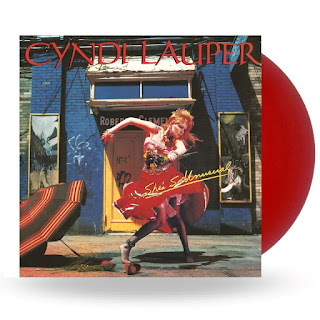 I spent much of last Sunday setting this ‘whole thing’ up and pottering around on social media - following the great and the good on the new Reissues By Women Instagram and Twitter accounts.  In the midst of this, it was lovely to receive a DM on Instagram from none other than Tanita Tikaram.  I discovered that Tanita has been posting a performance of a song from her catalogue on Sunday mornings on her YouTube channel for the last few months.  Last week’s ‘Sunday Song’ was an acoustic version of the song 'Trouble' - originally released on Tanita’s 1992 album Eleven Kinds Of Loneliness, but more recently included on the gorgeous 2019 compilation album To Drink The Rainbow, lovingly compiled by Pete Paphides for his Needle Mythology label.  (Full disclosure, I know Pete and the good people at Needle Mythology but they haven’t put me up to this!).  I did, of course, find myself down a YouTube rabbit hole, listening to previous Sunday Songs and to Tanita explaining the stories behind them - and being very captivated by the warmth of her videos (and also the lovely vertical bookshelves!). 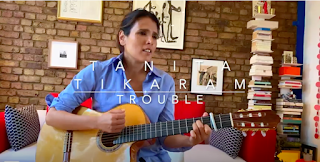 I also discovered this week that Kelley Deal now makes scarves.  I can’t think of Kelley Deal (or indeed her twin sister Kim) without being reminded of summers in the mid-90s on the country roads of the sunny south-east of Ireland with 'Cannonball' by The Breeders blasting out of the car stereo while I accompanied my friend for her driving practice in her mother’s Ford Fiesta.  Good times…
Reissues announced this week include Alanis Morissette Live at London’s O2 Shepherd’s Bush Empire, 2020 and Jewel Live At The Inner Change, both part of the Record Store Day Black Friday list for 27th November, plus Goodnight Songs For Rebel Girls, a partnership between the book brand Rebel Girls and Decca, featuring the likes of KT Tunstall, Anastacia, Imelda May, Beth Orton, Joan Jett and Anoushka Shankar, also for 27th November.  There's a signed lucky dip option for pre-orders (and the rebel girl in the Reissues By Women household is excitedly looking forward to which artist will have signed her CD!).
Next week’s listening is still to be confirmed - it looks to be a quieter week for physical reissues than the last few have been so it might be a digital focus.  Suggestions welcome!
And once again, the highlights from this week’s listening are collated in the updated Reissues By Women Spotify playlist...