"I've never had a singles box set before," I thought to myself as I delved into the stunning new Amy Winehouse 12x7 vinyl singles box set which was released this week via UMC/Island.  And then I remembered that I do actually own some singles box sets, but I have never taken them out of the shrink-wrap.  Yes, I am one of those kind of people.  However, I may yet break the shrink-wrap on those other boxes because much joy has been had working my way through the Amy box over the past few days.  As the title would suggest, it's a collection of twelve 7" singles, starting with 2003's 'Stronger Than Me', plus 'Take The Box', 'In My Bed' and 'Pumps' from her debut album Frank, then 'Rehab', 'You Know I'm No Good', 'Back To Black' 'Tears Dry On Their Own' and 'Love Is A Losing Game' from the number one album Back To Black; two singles released posthumously -  'Body And Soul' (with Tony Bennett) and 'Our Day Will Come', plus b-sides in all cases.  And there's a newly released Christmas single, 'I Saw Mommy Kissing Santa Claus', which was also made available digitally this week.  At the risk of spoiling surprises, this final disc has an intricate etched snowflake pattern on the b-side which is just gorgeous.  All twelve are in individual pictures sleeves with polylined inners.  Oh, and did I mention the magnetic clasp on the box?  Nothing like a satisfying little click!  There's a twenty page booklet, with lyrics and credits, plus three high-gloss art cards featuring photos by none other than Canadian rockstar/photographer Bryan Adams.  Sonically, it's great too - I particularly enjoyed listening to the single versions of her Back To Black hits, as well as a deeper discovery of the earlier singles which encouraged me to go back and listen to Frank in its entirety.  Hard not to feel a tinge of sadness about how such a talented artist's life was cut so short, but really heartwarming to see Amy's mum's reaction on Twitter to this box (and the forthcoming CD box set out next week). 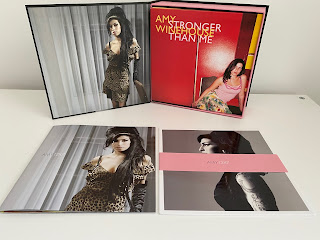 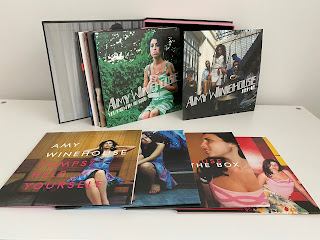 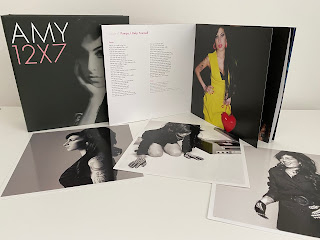 Also out on vinyl this week in the UK is a single-LP reissue by Nonesuch of Emmylou Harris' Wrecking Ball which turns 25 this year and won the Grammy Award for Best Contemporary Folk Recording in 1996.  Despite me being a somewhat lifelong U2 fan, and this album being produced by Daniel Lanois and featuring Larry Mullen on drums on nine of the twelve songs, I don't remember being aware of this album at all when it first came out.  Possibly too busy angrily listening to Alanis Morissette's Jagged Little Pill on repeat that year.  For others like me who missed it originally, it's predominantly a covers album which takes its name from the Neil Young song and includes songs written by Bob Dylan ('Every Grain Of Sand'), Anna McGarrigle ('Goin' Back To Harlan'), Lucinda Williams ('Sweet Old World') and Jimi Hendrix, whose 'May This Be Love' features here with a reminiscence of The Joshua Tree closer 'Mothers Of The Disappeared' about it to me.  The package includes a four-page insert with liner notes by Gillian Welch (whose song 'Orphan Girl' is covered on side 2), lyrics, credits and photos.  This is a 53 minute album, and with the audiophile purist tendency to look down on anything that's longer than 20 minutes per side, I was particularly interested to hear how it sounded.  And I can tell you it sounded absolutely glorious to me, and it has had repeated listens.  I felt a bit guilty about buying this from Amazon when we're all encouraged to shop local and shop independent right now but I really wanted it on release date and Amazon have proven to be the best at that in my experience so far - so I was somewhat relieved to see that Emmylou Harris redirects fans to Amazon from her website anyway!  I think the 1995-me wouldn't have particularly bothered with this album even if she did know about it, but the 2020-me was really blown away by it this week.  And that, my friends, is why having an active and available catalogue of music for artists is important! 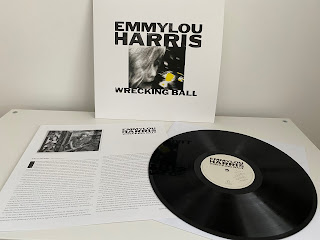 Another album turning twenty-five this year is Jewel's Pieces Of You, and this one has been expanded and reissued with a whopping 58 bonus tracks on the biggest of the formats of the 25th Anniversary Edition out this week via Craft/Concord.  All curatorial boxes have been very, very well ticked across the 72 track 4CD collection, which has the original album remastered, plus b-sides and rarities, demos and out-takes, and live tracks recorded at the Inner Change coffeehouse in San Diego's Pacific Beach.  There's a 2CD/4LP version too, and for those who would like the live show on vinyl, there's a 2LP of that out next week as part of Record Store Day's Black Friday event.  This is an album that has sold more than 12 million copies to date, and is an album that means a lot to many - it's cropped up in numerous conversations with friends over the past few weeks.  And I must admit that I had forgotten how familiar I was with it myself, particularly the singles 'Who Will Save Your Soul', 'Foolish Games' and 'You Were Meant For Me', as well as 'Adrian' and the title track itself.  I'm normally one to start at the start, but for whatever reason I started with the live show this time round and it didn't disappoint.  I loved that she left in the first attempt at 'Morning Song' that went awry, and all the inter-song chat about growing up in Alaska to becoming a singer-songwriter and moving to California really adds to it, especially her closing sentiment: "you should always get perfect moments stuck between your teeth".

Completing the hat-trick of 25th anniversary moments here, Mary J. Blige's second album My Life was reissued this week via Geffen/UMe.  Originally released in late 1994, singles were released throughout 1995 including 'I'm Goin' Down', 'Mary Jane (All Night Long)' and 'You Bring Me Joy' (which samples the same hook from Barry White's 'It's Ecstasy When You Lay Down Next To Me' as Robbie Williams' 'Rock DJ' subsequently did at the start of the following decade).  There's an expanded triple LP blue vinyl edition with additional bonus tracks including remixes by LL Cool J and Smif 'N Wessun.  The digital expanded version is a 'Commentary Edition', which includes introductions to all of the album tracks recorded by Mary.  It's historically really interesting to hear the story of the album in her own words, and a great way to represent an album digitally - although it's more of a podcast type experience, so for repeat listens I sought out the original version of the album.

A little known fact amongst people who have known me for less than 20 years is that I did my university dissertation on the Spice Girls.  It was catchily titled 'The Spice Girls As A Cultural Phenomenon', and if memory serves me correctly it spelt Victoria Beckham's maiden name incorrectly throughout (as 'Addams'. Altogether ooky indeed...).  This academic tome was completed in 1998 so only covered the first two Spice Girls albums, which means that their third album, Forever, from 2000 is less familiar to me as a result.  Released on vinyl this week for its 20th anniversary, it's a newly created LP package using original images, and includes four art cards - one for each of the band members.  Bookended by the number 1 singles 'Holler' and 'Goodbye' (the farewell to Geri), the 11 songs on this album are cut across two sides pressed on 180gsm vinyl, and housed in a gatefold sleeve.  This is the biggest selling girl band in history, so its nice to see that is reflected with a gatefold.  Reading about that period in Spice history this week, I was reminded that Forever was released a full year after Mel C's first solo album Northern Star.  Wonder will we get to see that on vinyl some day?  I'm a very big fan of 'Never Be The Same Again' in particular... 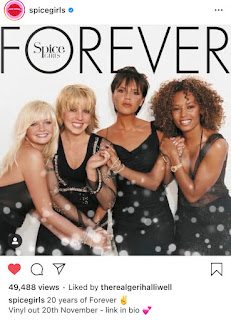 And ten years exactly to the week that it was first released, Nicki Minaj's Pink Friday gets a 10th anniversary 'Complete Edition'. Her debut album, it broke records after its release for the most weeks in the Billboard Top Ten by a female rapper, and the first single from the album 'Your Love' (featuring a sample of Annie Lennox's 'No More I Love You's') was number 1 on the Billboard Rap Songs chart - the first time the chart had been topped by a woman in almost a decade at that point.  Twitter have even done a special emoji for the anniversary too!

KT Tunstall is a busy woman.  She featured here a couple of weeks ago for her song from the Goodnight Songs For Rebel Girls album (out next week), and here she is again - this time for a cover of U2's 'I Still Haven't Found What I'm Looking For' with Pomplamousse which she shared on social media this week, just after the announcement of the 'Ultimate Edition' reissue of her second album Drastic Fantastic which is coming out in January.  She released 'Turn Into You - Acoustic' from it this week. 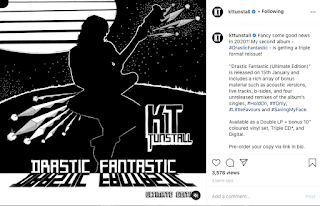 I discovered this week that Kylie Minogue has a range of wines.  This is the type of artist side-project news that I really like, so you'll no doubt be glad to know that I have ordered both the Merlot and the Rosé in the name of research.  More news on this to follow...

And although I'm not one for starting Christmas in November, I did pre-order the Tori Amos Christmastide EP this week.  It's got a special insert signed by Tori.  I couldn't not order it.  It's out in two weeks by which time we'll be into December which is an acceptable time in my opinion to be talking about Christmas music  - and I'll include Annie Lennox's 10th anniversary reissue of A Christmas Cornucopia which came out this week then too.  Might even do a Christmas playlist.  Feel free to send me your favourite Christmas songs by women for inclusion - hello@reissuesbywomen.com.

As always, the Reissues By Women Spotify playlist has been updated with a selection of tracks from this week's reissues.  Enjoy!