First of this week’s singles to make itself known to me on Friday morning was 'Edge Of Midnight (Midnight Sky Remix)' by Miley Cyrus and Stevie Nicks.  Is it a duet, or a mashup, or a collaboration, or a remix?  I don’t actually know, and it doesn’t actually matter.  In essence, Miley’s 'Midnight Sky' single from August this year, meets Stevie’s 'Edge Of Seventeen', originally released on her debut solo album in 1981.  It’s an absolute masterclass in how to get this type of thing right, and exactly the type of song I’d be hitting the Christmas party dance floor for if this was an ordinary year.  I’m just having to restrain myself from singing ‘Kelly, can you handle this?’ over the top of the intro…

KT Tunstall’s beautifully soothing cover of The Pretenders' 'Hymn To Her' has been released as a single from the forthcoming Goodnight Songs For Rebel Girls compilation album out later this month from Decca.  UK TV watchers may also have caught a rerun of KT’s 2004 performance of her song 'Black Horse And The Cherry Tree' on Jools Holland on BBC2 on Friday night - live-looping way before Ed Sheeran made it his thing.  The performance was chosen by Mel C who was this week’s guest on the show.  It was interesting to hear Mel - as a member of the most successful girl band in history - talk about the industry’s perception of girl bands when they were starting out: “Girl bands don’t sell records. Girls buy records by boys…” And the Spice Girls Forever is being released on vinyl for the first time to mark its 20th anniversary in a few weeks. 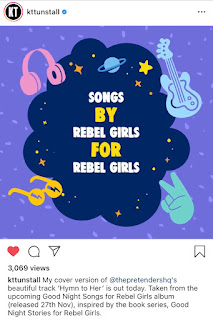 The Cranberries released a cover of The Carpenters’ (They Long To Be) Close To You this week, in the run up to the release of the remastered and expanded No Need To Argue which is out in multiple formats next week.  Dolores' unmistakeable Limerick lilt brings a whole new approach to a very California song. 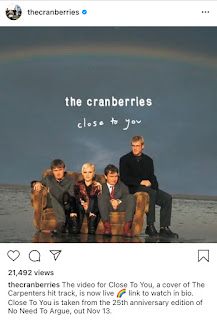 For those with Amazon Music subscriptions, a collection of ‘Amazon Originals’ were released this week to tie in with this year's Rock and Roll Hall Of Fame Induction - and St. Vincent’s cover of Nine Inch Nails’ ‘Piggy’ and The Kills’ cover of T. Rex’s ‘Cosmic Dancer’ are both worth checking out. 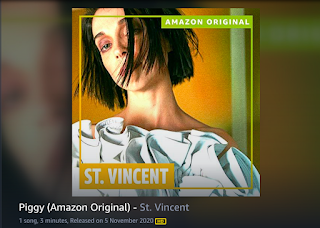 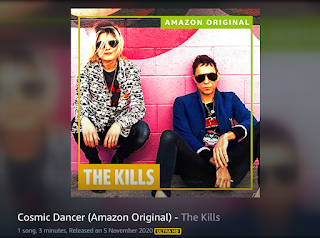 And The Kills had a new cover out last week too - of Screamin' Jay Hawkins' 'I Put A Spell On You'.  This is a recording that dates back to 2009, which is going to be part of their b-sides and rarities collection due for release on 11th December.

In the world of physical music formats, Mariah Carey's #MC30 celebrations continue this week with a drop of vinyl reissues of her '90s albums - from 1991's Emotions to 1999's Rainbow, and including her MTV Unplugged performance from 1992, all via Sony.  Music Box was the album of choice for the turntable this week, and it was such a strong reminder of why Mariah dominated pop radio across that decade.  Eleven songs over two sides, including four massive singles - from the opener 'Dreamlover', to 'Hero', plus her cover of the Badfinger song 'Without You', and not forgetting my own personal favourite 'Anytime You Need A Friend' - make up the biggest selling album in her catalogue, an album that at 28 million copies sold puts it in the top ten of biggest selling albums in history by a woman.  It's already sold out on Mariah's own online store (other retailers are available!).  More albums follow on vinyl between now and January, as part of the celebrations for Mariah's thirty years in music to date, including The Emancipation Of Mimi on 20th November via UMC/Mercury. 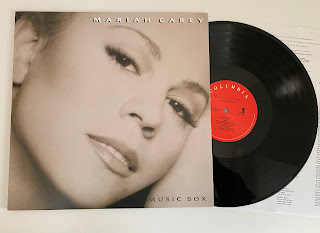 It appeared to be an extremely quiet week for physical reissues or catalogue releases by women, and up until about 10pm on Friday night I was almost certain that Mariah was the only woman who had catalogue releases in physical formats out this week.  But then I spotted a tweet from UMe who have reissued Lindsay Lohan’s debut album Speak from 2004 for the first time on vinyl.  Looks like it’s import-only for those of us outside the US, so it was the Spotify version for me. It’s 12 tracks of mid-noughties pop rock, including the single ‘Rumors’ (about her treatment by the press), but it’s the album opener ‘First’ that I am finding it impossible not to chair-dance to while I type this. 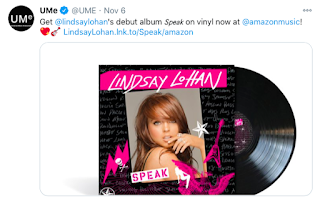 New-music-wise, the top echelons of the UK chart this week are hyped to feature new albums by Kylie Minogue and Little Mix.  But the new album I have been playing this week is Bitch Falcon’s debut Staring At Clocks.  It was recommended by Pillow Queens on their Instagram, and having loved PQ’s album, I was happy to take their recommendation.  Siouxsie Sioux and Cocteau Twins are the common comparisons so if they are your thing then this album is very much worth a listen. 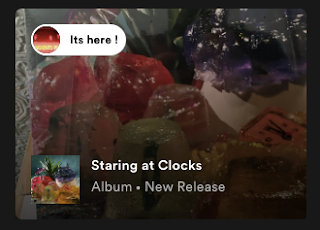 And round of applause to Paloma Faith for her article for Gurls Talk this week on the work of women.  I nodded the whole way through it… 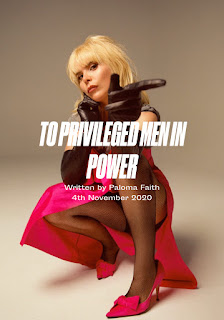 As always, the Reissues By Women Spotify playlist is updated with this week's highlights...