So I completely failed this week to order any physical products in time for Sunday.  (What kind of low rent music blog is this anyway, I hear you cry?).  But fear not, the magic of digital music subscriptions means that there is still plenty to write about.

Toyah Willcox is probably one of the most easily identifiable British female singers of the '80s.  Many of those of us who were young girls at that point will vividly remember her performing 'I Want To Be Free' on Top Of The Pops: "I'm bored. I don't want to go to school..."  That track was taken from her third album Anthem, but we're going back even further now as Toyah's excellently-titled debut album Sheep Farming In Barnet was reissued this week via Cherry Red as the start of a series of expanded releases of albums from her catalogue.  The deluxe edition features 41 tracks - 30+ bonus tracks (depending on whether you count the 1979 6-track EP, or the 1980 11-track LP as the "original" version), including demos and alternate versions of songs such as 'Neon Womb' and 'Danced'.  The physical deluxe edition also comes with a DVD featuring brand new content, and there's a limited edition white vinyl version of the 11-track album with exclusive artwork too.  One of the other things I discovered about Toyah recently is that you can get personalised artwork featuring your choice of her lyrics, and personalised video messages.  I have to say, I'm very tempted by the artwork idea (and the testimonials for the video messages are so lovely!). 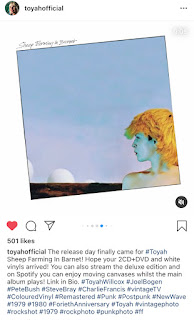 I gushed last week about Alanis Morissette's live album for Black Friday, and here we are this week with not one, but two Alanis Morissette releases.  The first of the two was announced last month, and is a blue vinyl reissue of her 2012 album havoc and bright lights, numbered and limited to 2000 copies.  I was pregnant, juggling a toddler, a busy job and a house move at the time this originally came out, so it completely passed me by first time round, but I have been enjoying the likes of 'guardian' and 'lens' this week, and if I'd had any headspace at the time I'd probably have really enjoyed this album when it first came out too.  Second release from Alanis is a digital EP called Such Pretty Forks In The Mix, 8 tracks in total - 6 remixes and two live versions of songs from her Such Pretty Forks In The Road album that came out in July this year.  It's released in collaboration with the label He.She.They, with a portion of the proceeds going to the charity Safe Place International to support LGBT refugees in Turkey & Greece.  'Smiling (Lauren Faith Remix)' and 'Diagnosis (Musing Remix)' have been on repeat this weekend. 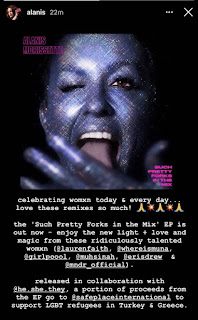 Biggest box set of the week goes to Shakespears Sister for Our History (The Complete London Records Collection), encompassing 4 pieces of vinyl, 6 CDs, 2 DVDs, a photobook, postcards, art print and sew-on patch.  It's limited to 1000 copies and ticks all the curatorial boxes with demos, alternate mixes, remixes, live tracks and a BBC radio session.  It's not available digitally, but I was prompted to listen to 1992's Hormonally Yours on Spotify this week and I was reminded just how many great songs it features (in particular 'Hello - Turn Your Radio On' and 'I Don't Care', as well as the mega-hit 'Stay'). 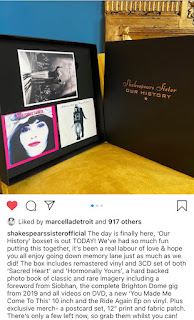 The Kills released Little Bastards this week - a fully-remastered collection of b-sides and rarities via Domino.  It spans 2003 to 2011 and includes the completely unreleased demo 'Raise Me' and some excellent covers, including a favourite in this household - 'Sugar Baby' by Doc Boggs, which sounds really great with Alison Mosshart's gritty lead vocals.  I actually did order this one on vinyl, albeit late in the week, so I'll post photos on Instagram when it arrives.  Also, because I love an artist-side project, Alison Mosshart is launching her latest collection of art for sale today - check out her Instagram for details. 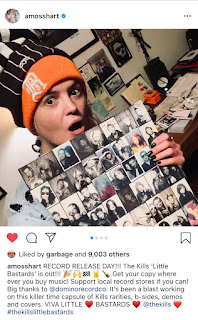 A single that was released digitally a couple of months ago, but comes out as a limited edition 7" via Heavenly Recordings this week is Sinead O'Connor's powerfully poignant cover of Mahalia Jackson's 'Trouble Of The World', with profits going to Black Lives Matter charities. 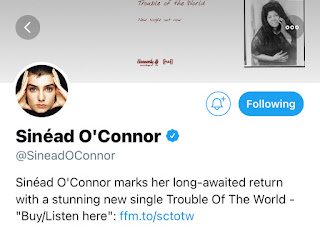 More Madonna maxi-singles this week too to mark the 30th anniversary of The Immaculate Collection - this time, 'Rescue Me', with an additional 6 mixes. 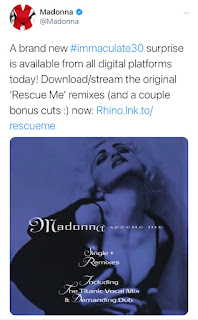 The Christmas playlist has been updated with a few more excellent festive tunes sung by women, and not forgetting the 'main' Reissues By Women playlist which has also been updated with some of my favourites from this week's releases.

It's a quiet week on the reissue release schedules next week so the plan is to do a little round-up of reissues and catalogue releases by women from across the year in what will be the last blog post of 2020.  If you'd like to contribute suggestions do get in touch - email hello@reissuesbywomen or DM me via Instagram or Twitter.