It's a digital week for Reissues By Women!  You may have seen reports at the end of last year that vinyl sales were at their highest point in thirty years. Which is really wonderful, but the demand for slots at factories, and the logistics of shipping things around the world - not to mention the importance of covid-safe manufacturing environments and pressing staff needing to isolate - are making physical releases increasingly difficult right now which means that a lot of vinyl (and CD) release dates are moving.  Understandably so, we are in the middle of a global pandemic after all.  So it is good that lots of music is popping up on digital services to keep us entertained in the meantime.

Probably the biggest catalogue release by a woman this week is Nancy Sinatra's Start Walkin' 1965-1976 which was released digitally, with vinyl and CD coming out in March (26th in the UK, 12th in the US). The collection, which was compiled with Nancy's two daughters plus Light In The Attic Records, features twenty-three songs from the era in question, including massive solo hits ('These Boots Were Made For Walking', 'Bang Bang'), rarities and nine duets with Lee Hazlewood ('Some Velvet Morning','Jackson'), all newly remastered.  The vinyl and CD formats will contain a new interview with Nancy, previously unseen photos from her archive and a new essay on her work by Amanda Petrusich.  A reminder that the musical legacy of the Sinatra family is not just those named Frank. 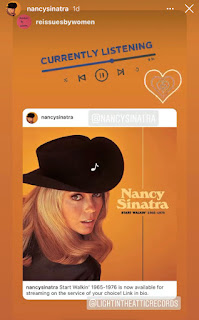 Carole King's iconic Tapestry album turns 50 this week, and the outtake 'Out In The Cold' has been released to digital services for the first time.  As an album that broke records for sales in the seventies (multiple times), and as one of the most successful albums by a woman of all time, it's only fitting that Twitter have given Carole her own emoji on Twitter.  There is a Tapestry Fan Wall plus her BBC performance of songs from the album will be available on her YouTube channel on Monday 8th February to mark the anniversary too.  And there's a great piece in the LA Times if you are looking for a longer read on King and the album. 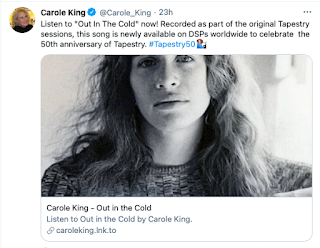 Regular readers will remember the beautiful Amy Winehouse box sets from last year, and some of the unreleased material from the CD box set is now being made available digitally. The first four tracks from her 2007 performance at the Shepherd's Bush Empire in London in 2007 were released this week, with four more from I Told You I Was Trouble: Live In London to follow next Friday. 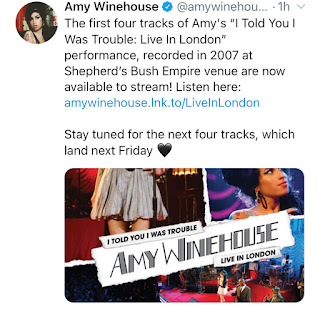 Another four Mariah Carey EPs have gone live on digital platforms: 'Touch My Body', 'I'll Be Lovin' U Longtime', 'I Stay In Love', and 'I'm That Chick'. Across the last three weeks alone, Mariah has released over 100 tracks digitally as part of her MC30 celebrations.  And quite rightly too - there is certainly little point in leaving these things on the shelf of an archive or sitting on a hard drive when the "Lambily" could be enjoying them.  It's 2008's E=MC2 in focus this week, including a new digital repackage of the album with two bonus tracks. 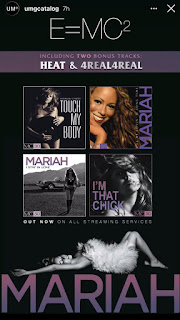 'Good Fortune', the latest demo from PJ Harvey's forthcoming Stories From The City, Stories From The Sea - Demos was released last Monday.  'Good Fortune' was the lead single from her (first) Mercury Prize-winning album in 2000, and the album is reissued on vinyl at the end of this month too, after many years of being out of print and commanding very high prices on the secondhand market. 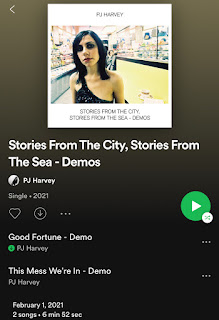 And whilst these don't come under the heading of new-to-digital music, new "love song" EP collections by Reba McEntire and Patsy Cline were released this week ahead of Valentine's Day next weekend. I am still not quite sure how we discovered it, but Patsy Cline's 'Crazy' was a big anthem for me and my teenage friends back in the early nineties!  Reba's catalogue is so incredibly impressive and vast (554 songs in her Complete playlist on Spotify), but I loved having this little collection to grab twenty minutes with over the weekend. 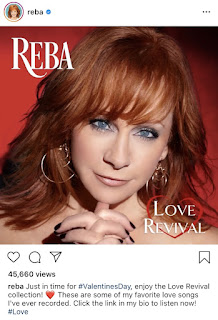 Forthcoming releases announced this week include reissues of The Go-Go's God Bless The Go-Go's from 2001 and Toyah's The Blue Meaning from 1980.

Thanks to everyone who has sent their favourite songs by women for the International Women's Day Spotify playlist that is in the works for next month.  Still plenty of time to get your suggestions in - email any contributions to hello@reissuesbywomen.com.

And as usual, the Reissues By Women 2021 playlist has been updated with some of this week's new-to-Spotify tracks.

Have a good week!