Possibly the biggest reissue 'story' this week is PJ Harvey's Stories From The City, Stories From The Sea.  The album, which has been out of print on vinyl for many years (decades, even) has been re-released on black vinyl, and alongside it, a previously unreleased collection featuring every song from the album in the demo form (on vinyl, plus CD and digital).  The album won the Mercury Music Prize in 2001 - Polly Harvey was the first woman to win the prize, and she remains the only person to have received the prize twice (the second being ten years later for Let England Shake). I had the CD version of Stories... when it first came out (indeed I still own that same CD) and played it pretty repeatedly.  Listening to it on vinyl this week, it still feels as captivating as it did twenty-plus years ago.  As both a companion piece and a standalone body of work, the demos are fascinating, especially the original version of  'The Mess We're In' without Thom Yorke.  And the album closer 'We Float' in demo form is just stunning. 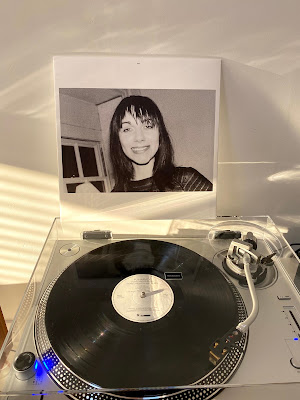 Is it impossible to mention The Glamorous Life, the debut album by Sheila E., without also mentioning Prince?  Probably. Whilst the word Prince is nowhere to be seen on the sleeve, his producer alias 'The Starr ★ Company' is.  And you can hear him in the background on the title track, which was a dance chart number 1 in the US in 1984 and nominated for a Grammy award.  At its most basic, if you like the style of Prince but with the sound of a woman on vocals then this is an album for you (safe to say I'll never win any prizes for music journalism for that sentence).  But it's more than that.  Female drummers that also sing lead vocals are few and far between.  And I'm going to venture as far to say that this is one of the key albums of the genre (as I write this, I am reminded of the excellent 'Female Is Not A Genre' t-shirt by The Franklys which realistically means that female drummer/vocalists is not a genre either, but I am really struggling for appropriate words today).  The Glamorous Life has just been reissued as part of Rhino/Warner's Black History Month celebrations, on a beautifully bright light blue vinyl.  Aretha Franklin's Young Gifted And Black is one of the other coloured vinyl titles that features, I've ordered that one too, and will hopefully feature it next week. 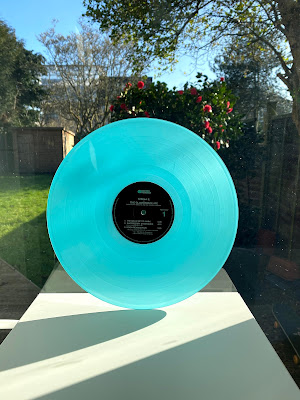 (I remain immensely proud of this photo which bamboozled my Instagram followers in its visual trickery!)

Roberta Flack's debut album, First Take, was expanded and reissued on vinyl and CD last year, and the digital deluxe version came out this week, also as part of Rhino's Black History Month celebrations.  Originally released in 1969, it was when her version of the Ewan MacColl song 'The First Time Ever I Saw Your Face' was featured in the Clint Eastwood film Play Misty For Me that things really took off.  The song was number 1 for six weeks in 1972 and went on to win a Grammy award in 1973; the album went to number 1 too.  The reissue features a collection of previously unreleased demos, including a gorgeous version of 'Ain't No Mountain High Enough' plus the original composition 'Groove Me', as well as b-side 'Trade Winds' and single edits of 'The First Time Ever I Saw Your Face' plus the album opener 'Compared To What', with its references to the Vietnam War, a conflict that was a key lyrical topic of the time (and on a related note, if you haven't already heard Roberta's cover of Marvin Gaye's 'What's Going On' released a few weeks ago, it's really worth checking out). 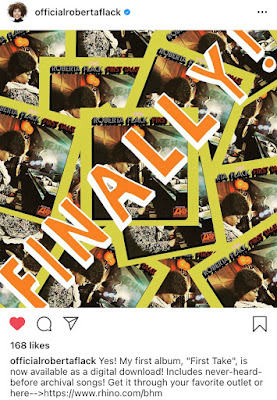 Regular readers will have observed the gradual rollout of I Told You I Was Trouble: Live In London, a 2007 live album by Amy Winehouse, released in four-track sections across this month.  And as guessed last week, this Friday saw the full set completed with the last four-tracks of the show - closing with a cover of the Maytals' 'Monkey Man'.  Amy's album Back To Black remains one of the best selling albums of this century, and all eleven songs from it are featured in live form here. 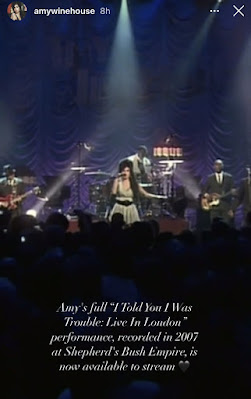 This week will be spent putting the finishing touches to the International Women's Day playlist in time for Monday 8th March.  Many of those who have contributed will have just packed their children back to school for the first time since before Christmas on that day, and I am predicting that they may be spending some post-drop off time dancing jubilantly in their kitchens (on their own) to this!

In the meantime, the 'regular' Reissues By Women 2021 Spotify playlist has been updated, as always.