One of my aims when I started this blog was to not write anything deliberately mean, or be unnecessarily rude or critical or dismissive of the music I was writing about.  "If you can't say anything nice, don't say anything at all" was often quoted at my siblings and I by our parents when we were growing up, not that we heeded it at the time, but I have had this as one of my principles when writing the blog each week.  People pour their hearts and souls into their music and just because I may not like it or appreciate it, or because I may not find the artwork appealing or the packaging special does not make it bad.  But I'm about to venture into the territory of 'not-nice' - although I am going to be extremely quick to caveat that it wasn't me who started it, nor do I have any first-hand experience of it!  About fifteen years ago, there used to be a phrase in the music industry which was: "on a scale of one to Goldfrapp, how bad are they?"  Alison Goldfrapp apparently being a "notoriously difficult" person.  And as a result, I have never, ever listened to a Goldfrapp album, or sought out any of their songs.  Every time the name comes up, my brain says "bad", simply as a result of that phrase.  So I challenged myself this week and not only did I listen to a Goldfrapp album for the first time, but I invested in it financially by buying the new reissue of the 2008 album Seventh Tree.  My first thoughts on opening it were "oooh, it's got a really cute owl picture on the label".  Big fan of owls here.  And the reissue is pressed on a gorgeous, vibrant yellow vinyl.  Two ticks so far.  And so I put the needle on the record and sat down.  It's got the singles 'Happiness' and 'A&E' on it, which I knew because they were hits that seeped into my consciousness.  But it's also got eight other great tracks on it too.  Turns out it's totally my kind of thing.  People can be rumoured to be not nice and still make really great records.  Who knew..? 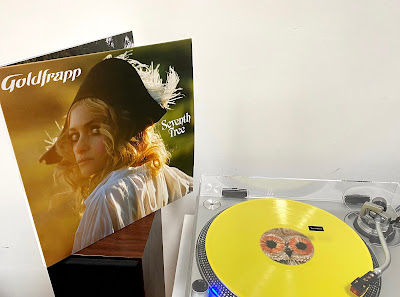 A couple more of my orders of Rhino/Warner's Black History Month releases arrived this week.  Over the past month there have been vinyl reissues by eight artists as part of this series, four of which are by women.  Fifty per cent.  It's possibly the first time that I have observed this level of gender balance in a campaign of this type, I dearly hope it continues and becomes a bit more of the norm.

First to arrive was Chaka Khan's Epiphany (The Best Of Chaka Khan, Vol. 1), on burgundy vinyl, which I couldn't resist pairing with a glass of red wine over on Instagram.  Cheesy, me?  Not sure if it was the visual combination or the music (probably the latter in fairness), but it got a lot of people chatting.  There is a lot of love out there for Chaka Khan, not least in my household as Side 1 Track 1 on this collection, 'Ain't Nobody' was the song chosen as the first dance at our wedding.  I'm a very big fan of the opener on Side 2, 'I'm Every Woman' too.  And I had also completely forgotten about the fact that 'Through The Fire' was sampled by Kanye West on 'Through The Wire' (although following that thing with Donald Trump, I don't tend to think about Kanye West much these days, to be honest).  Anyway, if you haven't already sought out a bit of Chaka Khan this week, I'd highly recommend doing so without delay. 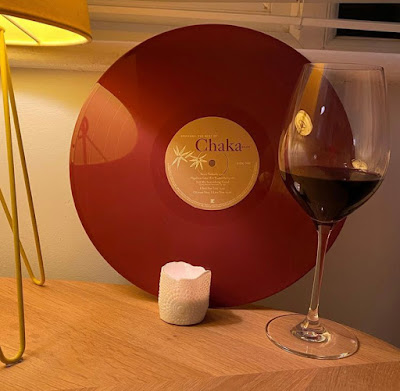 How do you choose the colour for a coloured vinyl release when the album title is Young, Gifted And Black?  Well, you pick a mustard yellow that exactly matches the colour of the outfit that Aretha is wearing on the cover, of course.  You'd be hard pushed to find anyone that doesn't like Aretha Franklin, myself included, but I did not own a copy of this album before now.  Of the twelve songs, my favourites are the original compositions 'Day Dreaming' and 'Rock Steady' but there are some absolutely stunning covers on this album, including the title track: Nina Simone's 'Young Gifted and Black', McCartney & Lennon's 'The Long And Winding Road', and Elton John and Bernie Taupin's 'Border Song'.  And a gorgeous high gloss sleeve with a suitably-retro brown board inside too.  Essential listening. 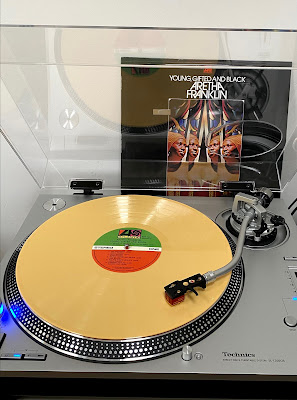 Lots and lots of stuff out digitally this week, including the unreleased demo version of Alanis Morissette's 'Predator', one of two songs written for the Jagged Little Pill Broadway show; the latest single from PJ Harvey from the forthcoming Uh Huh Her - Demos release (out 30th April); a 20th anniversary reissue of Eve's Scorpion (physical formats coming 16th April); 'Why Can't We All Get Along', a posthumous single from the forthcoming reissue of Mary Wilson's eponymous album on what would have been her 77th birthday; and a batch of International Women's Day digital EP releases from UMe under the moniker Women To The Front, including Shania Twain, Reba, Ingrid Michaelson and Kiana Ledé. 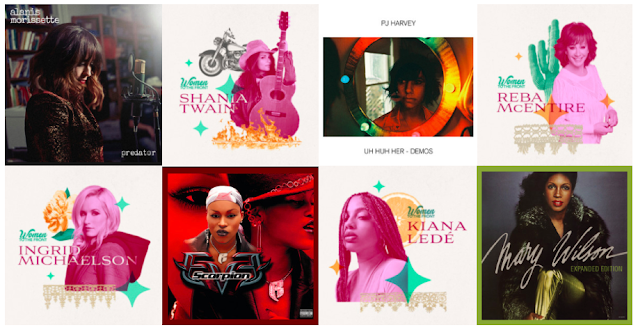 Speaking of International Women's Day, the final touches are in progress on the collaborative playlist which goes live tomorrow.  Don't miss it!!

In the meantime, the regular Reissues By Women 2021 Spotify Playlist is updated with a batch of the songs mentioned here...