It feels like a quiet week for reissues by women.  Which for once feels like a good thing, because I am really shattered.  Or maybe my tired state has meant my hunting instincts for reissues by women are down.  This was the week that the kids went back to school in the UK.  I was expecting euphoria and adrenaline.  I was expecting to be turbo-charged in my approach to everything, what with all those hours in the day that I haven't had for months.  What I got was waves of utter exhaustion.

For women in the UK, it has been a weird week.  Monday started well, as we were enveloped in the great empowering vibes of International Women's Day (more on that in a minute), but then the repercussions from that Oprah interview, and, by Wednesday, the emergence of horrifying details about the disappearance of Sarah Everard, a woman simply walking home, have not painted a great picture for the last few days. There was an outpouring from women everywhere for the days that followed about the prevalence of assault and harrassment from men.  "Please stop abusing us," we said.  And so last night's scenes of (male) police officers attacking women attending a vigil in Clapham were particularly hard to bear.  Today is Mother's Day and we're supposed to be celebrating all the niceties of women and their childrearing abilities.  It's incredibly difficult to process.  "Sometimes it's hard to be a woman," said Tammy Wynette in 1968.  Too right. 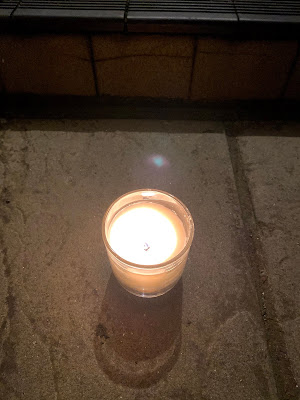 A photo from last night's doorstep vigil - a candle lighting on my doorstep in memory of those who did't make it home safely to their own doorsteps.

The somewhat-downbeat-to-say-the-least introductory note today felt like things that couldn't be ignored, although it is not intended do a great injustice to the utter joy and warmth brought by the reaction to the International Women's Day playlist this week.  A simple act of talking to people (mainly women) about music by women, and collecting together people's favourite songs by women really seems to have resonated. Thank you so much to everyone who took the time to contribute, listen, share and comment.  The overwhelming response to the playlist was one of comfort in the familiarity of long-loved favourites, pleasure from forgotten classics, and enjoyment of new discoveries. We need to do more of this sort of thing together, and I'm already thinking about the next moment for a collaborative playlist!

(Eventually, she gets to the point of the blog...)  Reissued digitally this week was Jhené Aiko's Sailing Soul(s), a 13-track mixtape originally released ten years ago.  The reissued version is expanded to 15 tracks, but interestingly doesn't include the song with Drake nor the one with Kendrick Lamar, and there is no sign of Kanye West in the song that evokes the title - 'sailing NOT selling' - which is a minute shorter than the original.  And actually this is more than fine by me, because generally I like my albums by women to be dominated by the sound of women and those lads get more than enough exposure elsewhere.  The title of the album is a play on the phrase "selling your soul", which came about after a meeting Jhené had with a record label where she was told by a male exec that she needed to sell herself.  After which she decided she preferred the concept of sailing rather than selling.  R&B isn't my go-to genre, but I loved this (and there are a couple of tracks in the Reissues By Women 2021 Spotify playlist). 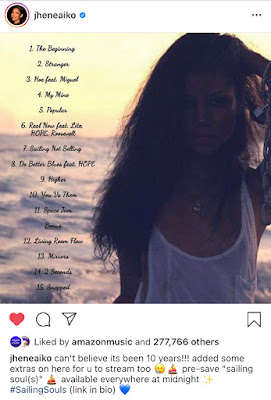 A heads up about some things coming up in future weeks and months in case you fancy a bit of pre-ordering:

Alice Coltrane's Huntington Ashram Monastery from 1969 is being repressed on vinyl, and out next week.  I've pre-ordered from Resident, but it's available from many record retailers.

If you like the work of Leonard Cohen, you may like First Aid Kit's Who By Fire, a release of their March 2017 tribute concert performance to Cohen out on 26th March.

Echobelly's People Are Expensive and Gravity Pulls are getting a first release on vinyl on 23rd April, there are signed options via their store, and also some signed lyric sheets.

The second in the series of Toyah's expanded album reissues - The Blue Meaning -  is out on 28th May.

And another thing I pre-ordered this week is the tenth anniversary reissue of Sharon Van Etten's Epic (appropriately called Epic Ten) - recordstore.co.uk have a signed print option and I remain unable to resist the signed prints...  It's out on 11th June.

Speaking of signed prints, I discovered via Instagram that Hazel O'Connor has signed prints of the lyrics to her 1980 ballad 'Will You' from the film Breaking Glass available on her website.  For just a fiver! This is one of my favourite ballads of all time, so I think I'm going to have to get one.  This song is the closing song in the IWD playlist, deliberately placed because of the amazing saxophone solo ending.  Glorious.

Have a good week everyone.  Stay safe out there...