Inspired by the work of The F-List, Keychange, Book More Women,  The Annenberg Inclusion Initiative, Women In Ctrl, Why Not Her, Women On Air and more, I had a look at the Record Store Day (RSD) list and broke it down by gender.

Here are the headlines:

Women make up only 20% of the list - and that figure encompasses women in any role, not necessarily as a lead artist. 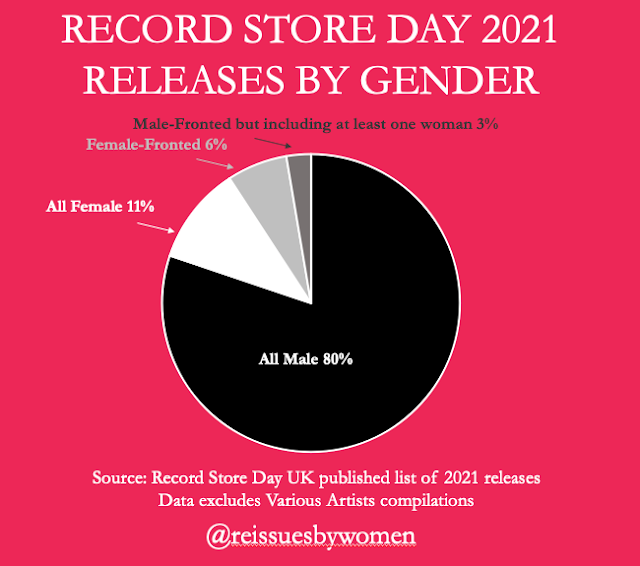 This is certainly not about pointing fingers at the organisers of Record Store Day - they are the publishers of the list rather than the generators of it.  The team at the Entertainment Retailers Association (ERA), who organise Record Store Day, are also the team behind National Album Day in the UK in October, and the theme for this year is "celebrating women in music".

This is also about more than just Record Store Day.  Aside from this year's National Album Day focus, and International Women's Day in March, this 80/20 split in favour of releases by men is a general trend throughout the year.  In effect, the Record Store Day list is just providing a quantifiable snapshot of releases aimed at physical music consumers to highlight the bigger picture.

But there is a piece of good news.  Broadly speaking, the 80/20 split is consistent with the RSD list for the last couple of years.  But this year, the percentage of female-only acts at 11% is higher than in previous years, where it was 6-7%.

Thanks to Senel Rifat for help with research.