The second collaboration between PJ Harvey and John Parish - A Woman A Man Walked By - was a relatively recent discovery for me in the grand scheme of things.  It's out this week on vinyl for the first time since 2009 as part of the ongoing reissues and demos series.  And as with everything Polly Harvey does, it's a beautifully crafted record.  Potentially a very predictable choice of favourite track here, but I just can't get enough of the album opener (and single) 'Black Hearted Love'.  I was having a conversation just this week with someone about artists who have collaborators that they have worked closely with across their entire career and it struck me that PJ Harvey and John Parish are a shining example of that.  This is the second of two albums by them as a duo, both excellent. 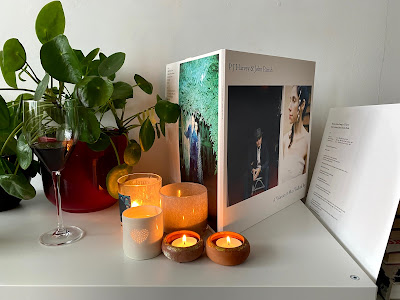 British independent label 4AD celebrated their 40th anniversary in 2020, and as part of that put together a new multi-artist compilation to celebrate called Bills & Aches & Blues (40 Years Of 4AD).  It includes eighteen of the label's artists covering a song from the 4AD catalogue, and whilst it's not exclusively female, I'm featuring it here on the strength of the female talent included, and the gender balance too.  And because I just love it.  The Breeders cover 'The Dirt Eaters' by 90s band His Name Is Alive, whilst their 'Cannonball' and 'Off You' are covered by Tune-Yards and Big Thief respectively.  And keeping with the Kim Deal theme (I have all the time in the world for Kim Deal), the album opens with a joyous cover of The Pixies' 'Where Is My Mind?' by Tkay Maidza (which leads the Reissues By Women 2021 Spotify Playlist this week too).  And there's Dry Cleaning covering Grimes' 'Oblivion', Jenny Hval covering Lush's 'Sunbathing', U.S. Girls covering 'Junkyard' by The Birthday Party, and much more. This collection came out digitally a few months ago, but it's out on double-vinyl and double-CD this week.  Loads more detail via the 4AD website, this is definitely going to be one of those albums I spend the summer talking about (not that I am one to repeat myself...!). 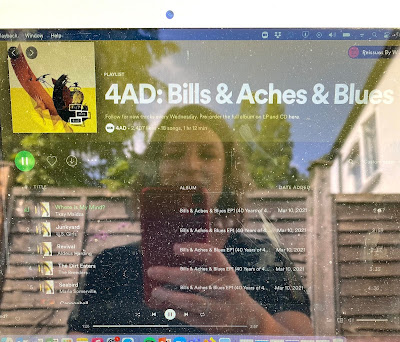 An 8-track collection of remixes of Salt-N-Pepa and En-Vogue's 1993 collaboration 'Whatta Man' appeared on digital platforms last week.  I haven't been able to find out why, but I'm not really questioning the opportunity to listen to an absolute banger of a tune such as this in multiple guises. 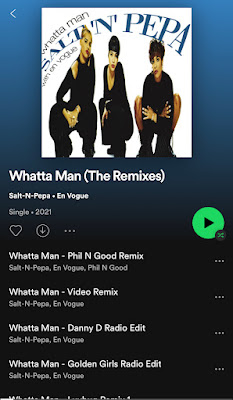 Barbra Streisand's Release Me 2 is due out on 6th August, a collection of previously unreleased and rare tracks, and the follow up to 2012's Release Me.  Advance single 'Sweet Forgiveness', originally recorded in 1994, was released digitally a few weeks ago and new-to-digital this week is a really lovely remix version. 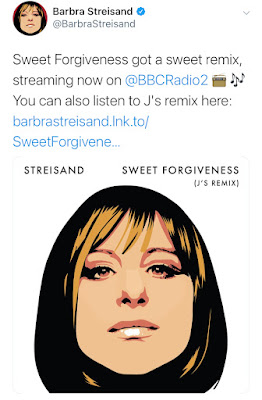 It's a full year since Taylor Swift released the album folklore and by way of marking the anniversary, she has released the original version of bonus track 'the lakes'.  (And later this year we'll get the second instalment in her re-recorded album series with Red (Taylor's Version) out on 19th November). 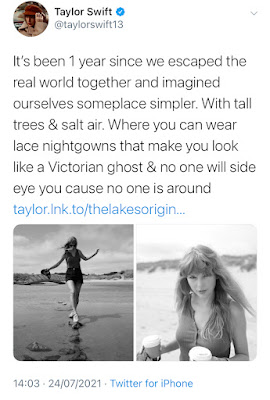 It's HMV's centenary this week and they have a special collection of limited edition pressings of iconic albums.  Those who follow me on Instagram may have seen my tally of the number of releases featuring women to those featuring men - nine out of thirty-six - as the special releases got announced. 25% is actually higher than a lot of female/male ratios in the music industry, but still...  Anyway, I'm a bit jittery about the covid case numbers in the UK at the moment so venturing to a HMV store wasn't appealing this weekend.  Kate Bush's Hounds Of Love was one of the exclusives, and the one I wanted - sadly (but unsurprisingly) sold out very quickly after the releases went online at 4pm yesterday though.  Oh well. 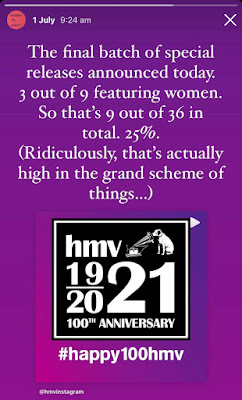 This will be the last blog post for a little while.  Taking a break during the school summer holidays to recharge and focus on family time.  The weekly blog will be back in September, but moving to a new day of the week - I'm going to try out a Tuesday publication day and see how it feels.  In the meantime, you may see a little post here or there on Instagram or Twitter, network permitting.

Before I wrap up, here's a heads up of some of the reissues and catalogue releases by women that are happening over the next few weeks:

Phyllis Hyman: Old Friend (30th July) - 9CD collection covering the period 1976 to 1998, the first box set of her music.  Includes a disc of previously unreleased recordings by the late American singer who blended soul/R&B and jazz.

Kim Wilde: Pop Don't Stop (6th August) - 5CD/2DVD collector's edition and 2CD hits collection. including the iconic 'Kids In America' and 'You Keep Me Hangin' On' and a new duet with Boy George.  The box set also includes additional singles, b-sides and remixes, plus the first ever Kim Wilde DVD collection.

Barbra Streisand: Release Me 2 (6th August) - the follow up to 2012's Release Me, a second collection of previously unreleased and rare tracks, on vinyl, CD and digital.

Corinne Bailey Ray: Corinne Bailey Rae (13th August) - reissue on vinyl of the debut/eponymous album from fifteen years ago which featured the hit 'Put Your Records On' (track 1 in the Reissues By Women International Women's Day Playlist!).

Sheryl Crow: Live From The Ryman And More (13th August) - a collection of 27 live tracks recorded in Nashville in 2019 on vinyl, CD and digital.

Ruthann Friedman: Hurried Life: Lost Recordings, 1965-1971 (20th August) - a 15-track collection of home recordings, unreleased demos and lost songs gets a marketwide release following Record Store Day Drop 2.  These rare tracks are previously unreleased on vinyl - and it's the first time her music has been released on vinyl in over 50 years.

Spice Girls: Wannabe25 (27th August) - picture disc and glitter cassette formats of the 4-track EP released digitally earlier this month to celebrate 25 years since the release of their debut single.

And a kind friend has procured for me an advance copy of the book Why Marianne Faithfull Matters by Tanya Pearson from the Faber 'Music Matters' series (out 5th August) which I'll be taking with me for some holiday reading.

Thanks so much to all of you who have been reading the blog and chatting with me on social media over the past 9 months or so, look forward to reconvening with you again after the summer!