I have had my house very full of many large boxes of records relating to my day job for about a month now, and I quite literally haven't been able to face having any more arrive into my house, so it's an all-digital listening week this week.  Vinyl consumption will resume very shortly!

I'm A Rainbow: Recovered And Recoloured is the latest release from the Donna Summer catalogue. The album I'm A Rainbow was recorded in 1981, but parked.  It eventually came out fifteen years later in 1996, but without any promotion or any singles released (although 'Romeo' had made an appearance on the soundtrack to the film Flashdance in 1983).  To mark the 40th anniversary of the recording, it has been "recovered" and remixed, and reissued this week on clear vinyl, CD and digital.  Eagle-eyed readers will have spotted that there was an advance blue vinyl pressing out last month as part of National Album Day and its theme "celebrating women in music" too.  The tracklist has been slimmed down from eighteen songs to ten - four of which have more than one remix in the package.  I wasn't familiar with the original at all, but I really loved the remixed version, especially Junior Vasquez's mix of the title track (written by Summers' husband Bruce Sudano) which opens the re-imagined album. 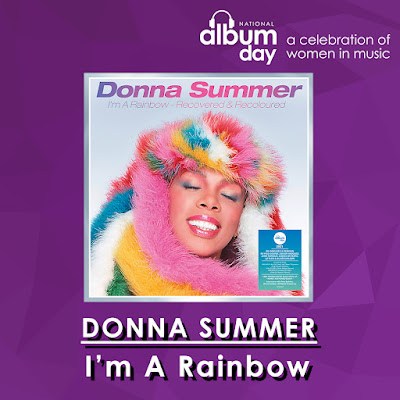 Also marking a 40th anniversary with a reissue this week is Olivia Newton-John and her 1981 album Physical, one of the most successful albums of the early eighties.  The original 10 track album has been expanded to 31 tracks for the deluxe edition, and includes singles from her follow up hits collection in 1982 ('Heart Attack' and 'Tied Up'), her delightful duet with Barry Gibb 'Face To Face' from 1984, a live recording of Dolly Parton's 'Jolene' from the Physical tour, and a host of mixes and alternate versions, including multiple versions of the title track itself, her biggest single, and a US number 1.

Kacey Musgraves has released a gorgeous cover of Coldplay's 'Fix You', as it has been used by food brand Chipotle in their animated short film about their campaign to support the next generation of farmers.  There's also a making-of video about Kacey's recording of the song.

Released digitally this week is Carole King's performance of 'Up On The Roof' live from the BBC Television Centre, and it's just beautiful.  It's a single from the album In Concert, Live At The BBC, 1971 which is an exclusive first-time-on-vinyl release on the Black Friday list for indie stores this coming Friday, and probably the one I'll be aiming to get my hands on this weekend!  The full Black Friday list is here. I have resisted the temptation to count the number of women versus men. 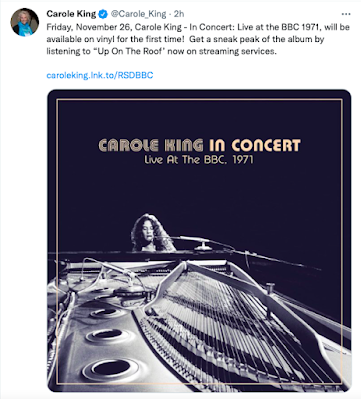 The other thing I will be doing this weekend is putting the finishing touches to the updated Reissues By Women Christmas Playlist.  Thanks so much to all who have been in touch with suggested additions, there are currently more than two hours of music awaiting a place amongst the original edition (which is here if you need it in the meantime!).  Let me know if you have any Christmas songs by women that you would like to see added - email to hello@reissuesbywomen.com or DM me via Instagram or Twitter.  The 2021 updated version goes live on Wednesday 1st December.

And for your non-Christmas playlist needs, the Reissues By Women 2021 Spotify Playlist has been duly updated this week, as always.