A lot of my favourite albums of all time date from 1991, but I was very embarrassed to realise recently that they are all by men (Out Of Time, Achtung Baby, the Black Album, Blood Sugar Sex Magik, Ten since you're asking).  So the thirtieth anniversary pressing of Saint Etienne's Foxbase Alpha on green vinyl served as a very welcome relief that I did more than just listen to rock by white men in the early nineties.  The mathematicians amongst you will notice that it's more than thirty years since September 1991, but vinyl pressing crisis, global pandemic etc.  And I learned something new from reading the credits on the sleeve - that Sarah Cracknell did not actually sing vocals on the cover of Neil Young's 'Only Love Can Break Your Heart', the album's lead single (vocals on this are by Moira Lambert).  I actually felt silly that I didn't know this, but when discussing it with my husband on Saturday night it turned out that he didn't know either - although maybe that just makes us both silly.  Lead single aside, my favourite song is 'Girl VII' - I've been a south-east Londoner for about twenty years, so I love the shout-outs to Plumstead Common and Silvertown.  This album is an absolute British classic, I'm going to venture so far as to suggest that it is essential listening. 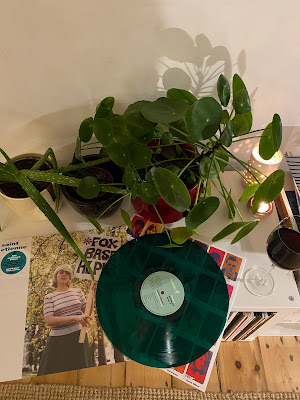 It's a new dawn, it's a new day, it's a new Nina Simone compilation.  There are about thirty compilations on Nina Simone's Spotify profile already.  Wikipedia lists more than fifty titles.  Discogs has 456 listings in their Nina Simone compilations section.  And yet, out this week is another.  Feeling Good: Her Greatest Hits And Remixes brings together nineteen songs plus an additional seven remixes by contemporary DJs to reach a new crowd.  I've got a Nina Simone compilation from back in the late nineties (when I was young!) that I played to death so I guess there is method in continually introducing one of the greatest singers of the last century to new audiences on a regularly repeated basis.  Six of the seven mixes in this latest compilation have been released since the collection was announced (leaving just Rudimental left for this week).  And I have been very pleasantly surprised in each case, although HONNE's remix of 'My Baby Just Cares For Me' remains my favourite.  It may be the four-hundredth-and-fifty-seventh Nina Simone compilation (does that make her the most compiled female artists ever, I wonder?) but it's a most enjoyable listen regardless. 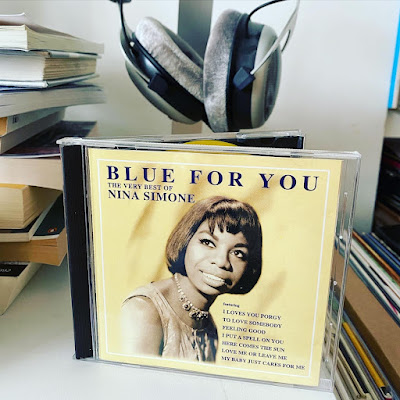 (My late nineties Nina Simone compilation, a Valentine's Day gift in 1999, pictured here for the week that's in it!)

'The Boy Is Mine' is up there with the best ever duets by women of all time, and I was most pleased to discover that the Brandy & Monica duet has been reissued digitally in its 'Stripped Version' form this week.  The original is the opening track on The Best Of Brandy, a compilation that dates from 2005 and has been reissued this week for the first time on vinyl, in a "fruit punch" shade by Rhino as part of their Black History Month releases.  I'd forgotten how many Brandy songs I knew ('Top Of The World', 'Almost Doesn't Count', 'Have You Ever?' to name but a few), not to mention the cover of Phil Collins' 'Another Day In Paradise', a duet with her brother Ray J which was a top ten hit all over Europe in 2001.  And is "fruit punch" what burgundy vinyl is called for those who don't drink alcohol? 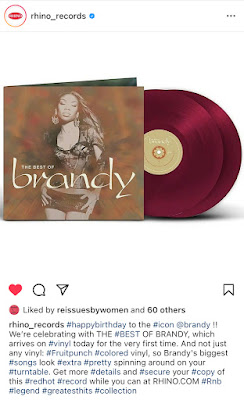 Fenne Lily's On Hold was completely new to me this week.  Originally self-released in 2018, her debut album was reissued this week on lime green opaque vinyl by Dead Oceans.  She's from Dorset which inevitably means PJ Harvey gets name-checked in blurbs about her, but I thought this was a much softer approach than that of PJH.  I love a reprise in an album.  And I particularly love that the reprise of album-opener 'Car Park' is called 'Car Park (Overflow)'.  I'm off now to check out her second album BREACH from 2020... 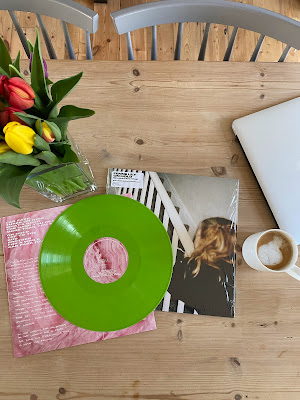 "Reimagined and totally acoustic" was how Tegan and Sara described Still Jealous, a newly released reworking recorded during lockdown of their 2004 album So Jealous, when they announced it a few weeks back.  I'm quite a fan of this way of announcing something and then not waiting the typical eight weeks for the release date (although in practice it's more than a bit painful when you are actually setting up a release with a short time between announce and release and trying to keep it under wraps, so the day job me is currently telling the blogger me to STFU).  Anyway, acoustic it is, and much enjoyed it has been this week. 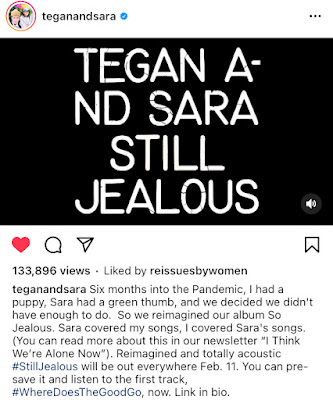 Speaking of acoustic, Kathleen Edwards has an EP coming out on 1st April that is excellently titled Dogs And Alcohol.  It's a collection of acoustic versions of songs from her 2020 album Total Freedom. First single was released last Thursday, a cover of John Lennon's 'Love'. 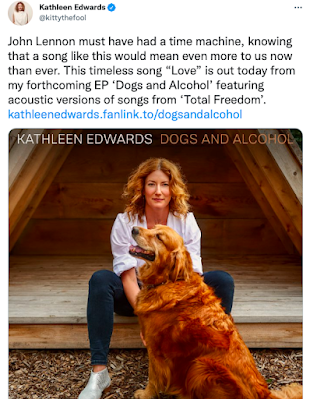 Roberta Flack's 1981 soundtrack to the film Bustin' Loose was made available digitally this week.  I'm not familiar with the film, but it stars Richard Pryor so I reckon I might like it.  Speaking of films, I have the BBC documentary Carole King: Natural Woman on my list.  But I needed to finish watching the Janet Jackson documentary first.  I loved the bit in the final episode where Janet takes to the stage at the Rock And Roll Hall Of Fame induction ceremony and suggests that the Hall Of Fame should induct more women.  Yes Janet! 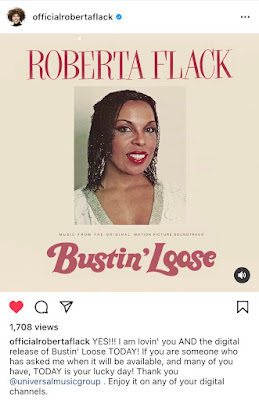 I haven't seen any of this year's Masked Singer UK series, but it has come to my attention that the winner was a Panda, disguising none other than Natalie Imbruglia.  And she's released her cover of One Direction's 'Story Of My Life' in the last few days following the series finale at the weekend.  Her debut album Left Of The Middle turns 25 this year too and a UK tour has just been announced. 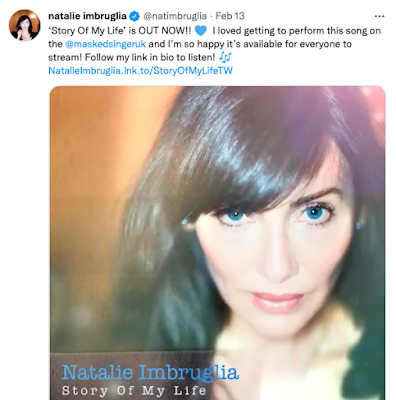 And as always, the quickest way to find the music mentioned above is in the Reissues By Women 2022 Spotify Playlist which is right here.