The Anchoress, aka Catherine Anne Davies, posted on Instagram in the middle of last week that she was releasing a cover of a song from the REM album Automatic For The People on Friday via Bandcamp and invited fans to guess which song.  I admit that I really hoped for 'Nightswimming', but have been very much enjoying her cover of the deeper cut 'Sweetness Follows'.  That one is exclusive to Bandcamp (it may even have been taken down by the time this blog post publishes), but there's a new single on all digital platforms this week: 'Let It Hurt (Dave Eringa Mix)' taken from the forthcoming expanded reissue of her album The Art Of Losing out on 4th March. 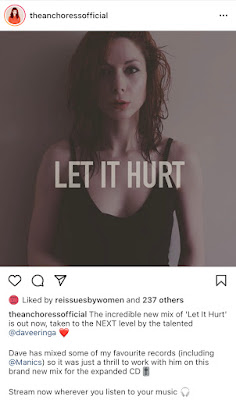 Also out on 4th March is a 38-track collection of Mary Wilson's work: The Motown Anthology.  The second single from that, her cover of 'Son Of A Preacher Man' was released this week to join 'Falling In Love With Love (Live At The Frontier)' which was recorded in January 1970 and made available a few weeks ago. 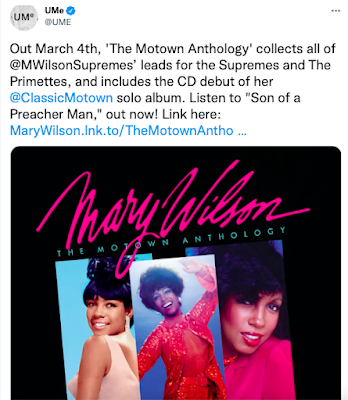 I got very excited this week at the Instagram post by Light In The Attic Records which mentioned that the Karen Dalton documentary was streaming via Amazon/iTunes.  Sat down with a glass of wine on Saturday night but sadly nowhere was it to be found on my Amazon Prime account.  I guess perhaps it's not in the UK yet?  Anyway, I'm sure it will be worth the wait and in the meantime another single has been released from the 50th anniversary reissue of In My Own Time.  'Are You Leaving For The Country' was performed live at the Montreux Golden Rose Pop Festival on 1st May 1971 and is one of four tracks from a previously unreleased live set at that event that comes out as part of the super deluxe edition next month.  The vinyl is being pressed at Third Man Records, which generally is deemed to be a mark of quality (and I have mentioned before about the level of quality of the Light In The Attic packages).  I try and keep the negativity to a minimum in this blog, particularly if it is levelled against a specific organisation, but I'm going to venture that I haven't felt the same about Third Man since I became aware of the uniforms that female staff were obliged to wear for numerous years.  Compulsory short dresses and high heels for roles in manufacturing and retail... 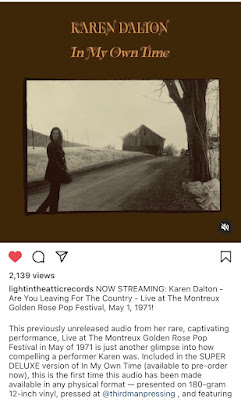 As mentioned last month, there is a celebratory release on the way in a few weeks' time to mark the 80th birthday of Yoko Ono.  It's a collection of covers, curated by Death Cab For Cutie's Benjamin Gibbard, under the title Ocean Child: Songs Of Yoko Ono. The latest single to be released is Japanese Breakfast's cover of 'No One Sees Me Like You Do'. 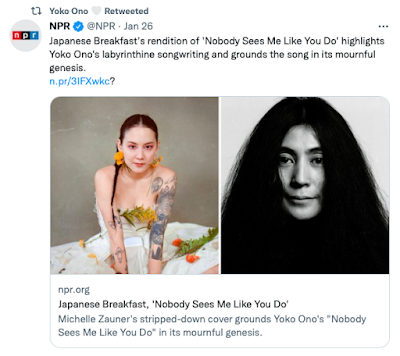 Another week, another PJ Harvey digital single (looks back at last four weeks of blog to confirm that this is indeed the fifth week in a row that we've had previously unreleased music from Polly...).  Top of my Spotify Release Radar this week was 'The Community Of Hope - Demo', the second single to be taken from the forthcoming album The Hope Six Demolition Project - Demos which comes out on 11th March and is the final instalment in the series.  I'm going to be very sad when this series ends.  The studio album is reissued on vinyl on the same date too.

I have been making my way through the Janet Jackson documentary on Sky.  I'm two episodes in out of the four.  I'm not yet sure what I think of it, but it is prompting me to listen to more Janet Jackson.  I've added the excellent 'When I Think Of You' from the album Control to the Reissues By Women 2022 Playlist alongside all the other tracks mentioned above.

It's a short instalment this week as it seems that there were no albums under the broad spectrum of what I class as 'reissues by women' out this week.  I was expecting the Nina Simone collection, but seems it has now moved to Friday 11th (not the first time this release has not turned up when I expected it!).  Let's see...