MADONNA, CHRISTINE MCVIE & THE SHOCKING NEWS FROM THE US

I sat down to write this blog post about reissues, but actually my head is still just full of the shocking overturning of Roe vs Wade by the Supreme Court of the US on Friday.  And whilst Glastonbury dominated much of the music coverage in the UK this weekend, it was heartening to see female artists at the festival speak out about the decision - Phoebe Bridgers and Olivia Rodrigo in particular, Billie Eilish too.

There were utterly hordes of (mainly female) artists posting about it on social media all weekend, including Madonna, on her Instagram on Sunday.  A point which does enable me to segue (albeit clunkily) back on topic - her post was following an event to mark the release of the first format from her Finally Enough Love collection, the 16-track digital compilation which serves as a taster for the CD/2LP physical release as well as the bigger '50 Number Ones' collection coming out on 6LP/3CD/digital on 19th August.  Madonna is the first person in history to have fifty number ones on any single Billboard chart, in this case the Dance Club Chart.  Whilst the forthcoming 50-track version opens with 'Holiday' (the first of those number ones from 1983), the newly-available 16-track version opens with the 1987 'You Can Dance' remix of 'Everybody' (Madonna's first single from 1982, which celebrates its 40th anniversary this year).  Both collections span four decades of hits, including 'Into The Groove', 'Like A Prayer', 'Vogue', 'Secret', 'Frozen', 'Music', 'Hung Up', and the most recent one, 'I Don't Search I Find' (the lyrics from which the collection takes its name).  We got a new kitchen speaker this weekend and I have been dancing around whilst doing my housework.  I'm sure that's what Madonna had in mind for this collection... 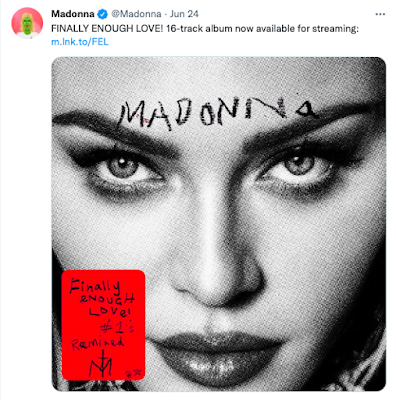 And another Rhino release out this week comes from Fleetwood Mac's Christine McVie.  Songbird (A Solo Collection) is her first ever compilation release, ten tracks mainly drawn from her solo albums (the self-titled 1984 album and 2004 follow-up In The Meantime) as well as two previously unreleased tracks and of course a reworking of the Rumours' classic 'Songbird' which puts a new string arrangement with Christine's original vocal, and gives this collection its name.  It's out on vinyl (green and black options), CD and digital. 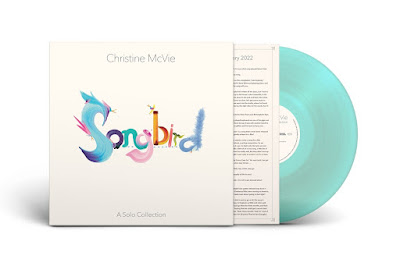 And so concludes the reissues news for this week.  Is it just me or have the number of reissues been dropping in recent months?  Maybe my tracking skills have been dropping!  Let's blame the vinyl crisis rather than a drop in my commitment to blogging, shall we?!