School's out for summer - well nearly... and with that, it's time for this blog to take a little break.  So this week's post is going to feature a round-up of some of the great reissues and catalogue releases that are scheduled to come out over the next six weeks or so and into early September.

In chronological order, here we go:

Heather Small - Colour My Life: a collection of reimagined recordings of Heather's hits with the London Metropolitan Orchestra on vinyl, CD and digital (29th July)

Swing Out Sister - Blue Mood, Breakout And Beyond: 8CD collection, subtitled 'The Early Years Part 1', it spans the albums from 1985 to 1992 complete with b-sides, remixes and more (29th July)

Bobbie Gentry - The Girl From Chickasaw County: 2LP and 2CD highlights collection from the Grammy-nominated 8CD box set of the same name from 2018 (5th August)

Kylie (& Jason) - Especially For You: single reissue on 7" black vinyl or cassette or both! (5th August)

Madonna - Finally Enough Love: Fifty Number Ones: marking her historical feat as the only person to have achieved fifty number ones on any Billboard chart - in this case the Dance Club chart - there's a 50-track version (6LP, 3CD, digital), and a 16-track cut-down collection (2LP, 1CD and the already available digital version) too (19th August)

Shakespears Sister - Hormonally Yours: 30th anniversary reissue of the iconic 1992 album in multiple vinyl and CD formats, with signed A5 art cards via the band's own store (19th August)

Shirley Murdock - As We Lay - The Electra Recordings 1985-1991: 3CD box set including Shirley's three albums from this period, plus 10 bonus tracks (19th August)

Blondie - Against The Odds: 1974-1982: 124-track collection, including more than thirty previously unreleased recordings from the period in the title, multiple formats including 10LP and 8CD (26th August)

Regina Spector - 11:11: 20th anniversary reissue of her debut album as a 3LP vinyl box set, including a remaster of the album plus the endearingly titled 'Papa's Bootlegs' - a collection of live recordings made by Regina's dad at her early shows, across 2LPs (26th August)

Valerie June - Under Cover EP:  8 track collection of covers including her versions of Nick Cave's 'Into Your Arms' and Frank Ocean's 'Godspeed' (26th August)

Toyah - Anthem: the latest in the Toyah catalogue to be reissued in multiple formats, including a super deluxe 3CD/DVD/2LP/7" box set which includes a 40 page booklet and a 12" print signed by Toyah Willcox (9th September)

I hope that whets your appetite for music as much as my appetite is whetted to be back in the sea again soon!  Have a great summer, thanks again for reading. 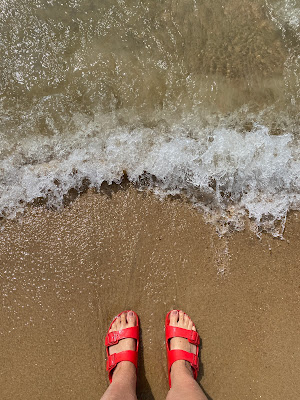