Sophie Ellis-Bextor: what an all round wonderful person.  She absolutely owned lockdown live-streaming with her Friday night Kitchen Disco performances, speaking to so many of us who were juggling full time jobs and managing children at home all day for weeks and months, as she parented while doing her own 'day job' of singing and dancing.  Classic quips to her family of "Don't step on the baby", "I'll give you a snack", "I'll be there in a minute", and my own personal favourite line to the audience: "Crying, me? Maybe just a couple of times a day in a closed cupboard," are intertwined with her hits without missing a beat.  All the while children climbed up windows, wore costumes, put baskets on their head, waved swords and light sabres, tripped over the baby, fiddled with the phone that was running the stream...  It was just so glorious and uplifting at a time when not much was glorious and uplifting at all, and at a time when a lot of the live-streaming events were all a bit try-hard and worthy and depressing.  And throughout it all, even when it was chaotic, it was supremely classy and a real reminder that she is a great artist.

And from these lockdown sessions comes the title for her first ever greatest hits collection - Songs From The Kitchen Disco.  Standing in the post-school-drop-off coffee queue on Friday morning with my headphones on, I found it almost impossible not to bust some moves to 'Murder On The Dance Floor' which is one of the twenty tracks included here, alongside 'Groovejet (If This Ain't Love)', 'Take Me Home' and excellent covers of New Order's 'True Faith' and Pulp's 'Do You Remember The First Time?'. 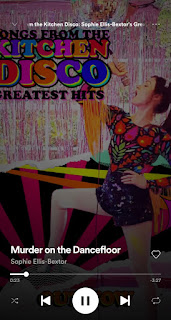 I ordered the exclusive pink cassette version direct from Sophie's online store.  Regular readers may remember a point about cassettes last month where I was too lazy to set up my cassette player.  So pre-ordering this was a sort of test for myself to see if I could have the cassette player set up by the time it arrived.  Readers, I can tell you that I have failed this test.  However, I have been streaming it on Spotify and it's always a winner for any artist when you buy a physical product, don't play it, but then stream it instead, so I am pleased that my laziness is Sophie Ellis-Bextor's gain.  The pink cassette is incredibly cute - and sold out!  Despite having co-ordinated a few cassette reissues myself in the last few years, I had forgotten how lovely and dinky this format is.  And no scrimping on the artwork here either - it's a 12-panel inlay with song credits, photos and a personal message from Sophie.  It also comes in a lilac cassette (still available at the time of writing), plus pink and blue double vinyl options, as well as CD.

Sophie has also launched a podcast series called Spinning Plates this year.  Each week she interviews a well-known working woman, who also happens to be a mum.  And it's brilliant.  The interviews are in-depth but never rambling, Sophie is an astute and compassionate interviewer, and she contributes just the right amount of her own opinions and experiences without ever taking over the conversation.  Frank, relatable, and usually with a bit of humour thrown in - highly recommended, especially if you are a working woman who happens to be a mum too.  My faves so far have been Hadley Freeman, Caitlin Moran, Nadiya Hussain and Louise Redknapp.

Speaking of podcasts, Garbage announced on Instagram this week that Shirley Manson's podcast The Jump would be returning for a third series.  In each episode, Shirley asks a musician to talk about the song of theirs that had the most impact on their lives and careers.  I've been working my way through series one and two, and have particularly enjoyed the episodes with Karen O, Courtney Love, Liz Phair and Sharon Van Etten so far.  Look forward to seeing who is featuring in series 3. 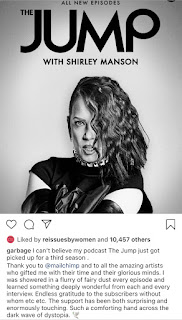 The Cranberries were featured briefly in last week's blog post, and I received a tweet in response from a friend reminiscing about memories of studying as a sixth former.  And as I sat at my own desk this week listening to the new reissue of No Need To Argue, I was struck by the strong memories of studying for my own final school exams that it evoked from even the opening bars of 'Ode To My Family'.

Originally released in 1994, it is the most successful album in The Cranberries' catalogue, and features four singles including the aforementioned 'Ode To My Family', plus 'I Can't Be With You', 'Ridiculous Thoughts' and of course 'Zombie'.  The 25th anniversary reissue includes multiple formats, including a double vinyl with 5 extra tracks, plus a 2CD and equivalent digital deluxe version which has a total of 36 tracks, including b-sides, demos and live tracks from shows in Liverpool and Milton Keynes.  I have been listening to the digital deluxe on Spotify and hearing Dolores speaking in the intro to some of the live performances is incredibly poignant.  I pre-ordered the D2C exclusive ultra-clear vinyl version but it hasn't arrived yet - when it does I'll share some photos and more thoughts on Instagram.

As an aside, I will admit that I spent a disproportionate amount of time this week trying to find a YouTube clip of Aisling Bea and Sharon Horgan’s version of 'Zombie' from the TV series This Way Up - glad to report that I eventually found it on Twitter.  I dithered about whether to mention it, because 'Zombie' is such a serious song that I feared introducing a comedic element may not be appropriate.  But it is a real illustration of how big an icon Dolores was to so many women now in their 30s and 40s and of how her influence continues in popular culture today.

What's clear too from listening to Dolores speak in between the live tracks on the reissue of No Need To Argue is how passionately she felt about certain issues, and in particular the safety of people against harm. And although this next song has been out a while, it seems relevant to mention Irish Women In Harmony’s version of The Cranberries' ‘Dreams’.  It was released back in June and features thirty-nine Irish female artists and musicians including Imelda May, Clannad’s Moya Brennan, Caroline Corr and Una Healy.  I’ve added it to the Reissues By Women Spotify playlist for this week, so do check it out because it is really gorgeous and also because it is in support of the domestic abuse charity Safe Ireland, so the money from all streams will go towards that cause. 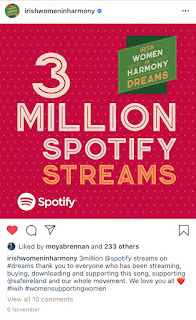 Last week I talked about my delight at the collaboration between Miley Cyrus and Stevie Nicks, and this week I have been equally delighted by the collaboration between Kelsea Ballerini and Shania Twain who duet on a new version of Kelsea's 'Hole In The Bottle', in the week when Shania's '(If You're Not In It For Love) I'm Outta Here' turns 25.  It's absolutely everything you would expect from a song with such a wonderful title!

And also out this week is Billie - the soundtrack to the forthcoming documentary film about 'Lady Day' herself, Billie Holiday.
Worth mentioning how excellent it was to see four of the top five spots in the UK album charts this week being held by women - Kylie, Little Mix, Ariana Grande and Shirley Bassey.  And according to the Official Charts Company this weekend, Kylie has broken a chart record too - the first woman to have a number one album across 5 consecutive decades.

Next week appears to be a bountiful week for reissues by women, including the Amy Winehouse 12x7 singles box, 25th anniversary reissues for Jewel's Pieces Of You and Mary J Blige's My Life, plus a 20th anniversary vinyl release of Spice Girls' Forever.

In the meantime, happy listening!