This week's mid-February grey weather has been brightened up by the arrival of some brightly coloured vinyl in my household...

Emmylou Harris' two-disc Red Dirt Girl has been reissued on transparent red vinyl by Nonesuch Records.  Originally released in September 2000 on CD and cassette (her first for the label), it won a Grammy award for Best Contemporary Folk Album and was her follow up to 1995's Wrecking Ball (which featured on this blog back in November).  It first came out on black vinyl a few years ago and now exists in a beautifully vibrant red.  Eleven of the album's twelve tracks were written by Emmylou herself, and it features guest appearances by Patti Scialfa and Bruce Springsteen on Side B's 'Tragedy' and Dave Matthews on Side D's 'My Antonia'.  There is such an elegance and warmth about this record, and I loved the little note in the credits that said "thanks to Daniel Lanois for the push" - because we all need a bit of a nudge to do things sometimes, icons of the music world included, it seems. 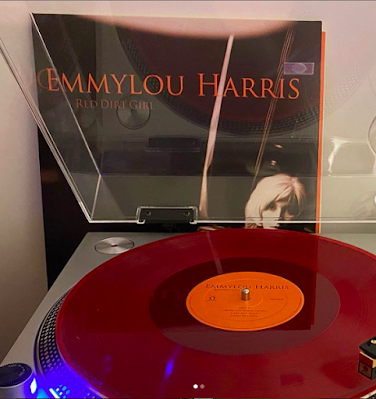 With unusual swiftness of just six days between announcement and release date (and indeed delivery) is Shakespears Sister's Hormonally Yours, reissued by London Records midweek on Wednesday 17th February to mark the exact date of the 29th anniversary of the album's original release.  This album is one of the defining sounds by women (and also for women, although not exclusively so) of the early nineties, with five singles in all - from the album opener 'Goodbye Cruel World' and the closer 'Hello - Turn Your Radio On' via 'I Don't Care' and 'My 16th Apology' and of course, the one that remains their best selling to date, 'Stay' which spent 8 weeks at number 1 in the UK.  Reading the credits on the inner sleeve this week, I discovered that the album was recorded at George Harrison's home studio, Friar Park, and was again reminded that it's details like these that you just don't get from digital formats.  The blue vinyl is gorgeous, and for those who prefer CD, there's an expanded 2CD version with alternative versions, remixes and unreleased tracks. 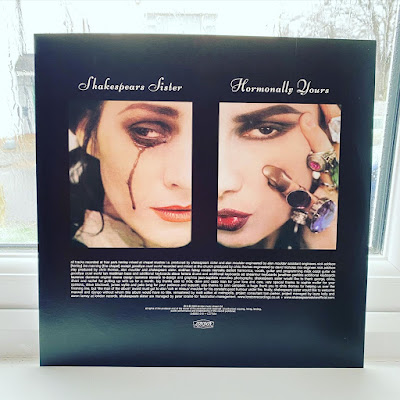 Amy Winehouse's I Told You I Was Trouble: Live In London gets another four tracks in the set this week, taking it to twelve of the sixteen on the CD version.  It's got to be safe to assume another four more next week, right?  Interesting to watch how this has rolled out, and I like the idea of getting little bitesize collections every week that all ultimately fit together as a whole album.  Attention spans are not what they used to be for many of us, what with the multi-tasking requirements of lockdown etc... 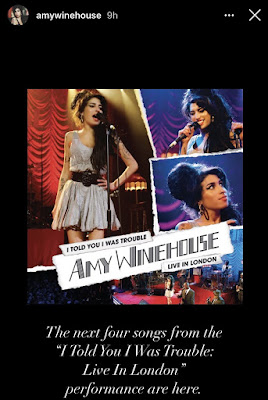 Something passed me by last week (the absolute shame!), and it's just one track so far, but it's quite a big deal.  Partly, because it's Taylor Swift and Taylor Swift is a big deal.  But also, because this is the start of her re-recorded versions of her catalogue, with the subtitle 'Taylor's Version'.  First song to drop is a newly recorded version of 'Love Story' from her 2008 album Fearless.  Taylor's Version of Fearless will also include additional bonus tracks.  This reissue is an excellent story of a woman taking control of her own catalogue, after the original master recordings of her first six albums were sold by her former label Big Machine to Scooter Braun, and then in turn sold to a private equity firm.  The original version of 'Love Story' has amassed 412 million plays on Spotify in thirteen years.  The new version has amassed 23 million plays in just a week.  It won't take her long to over-write history.

I resubscribed to NowTV on Tuesday night, just so I could watch Framing Britney Spears, the New York Times documentary looking at the conservatorship situation that she has been under for thirteen years.  It's not an easy watch, and possibly not the best documentary ever made, but if there was ever a reminder of the horrific treatment of a female artist then this is certainly in that category.  Grace Medford's article for The Guardian is a good read on the subject.

As always, the Reissues By Women 2021 Spotify playlist has a selection of this week's tracks added.  And the forthcoming International Women's Day playlist has become a wonderful unstoppable force that has seen WhatsApp groups buzzing and my phone pinging all week with names and song titles!  Still time to add your favourites before March 8th - email hello@reissuesbywomen.com or DM via Instagram or Twitter.