Not a massive week at all for reissues by women, so it's a good thing I kept a few from last week!

Like many artists last year, Lucinda Williams wanted to do something to support the independent live venues that were at risk of not being able to come back from the effects of the pandemic.  And so Lu's Jukebox was born, a series of ticketed live stream events from Ray Kennedy's Room & Board Studio in Nashville towards the end of 2020.  Each of the six events saw Lucinda perform a set of songs by other artists, and her tribute to Tom Petty - Runnin' Down A Dream - was released last week on vinyl and CD as the first in the Lu's Jukebox series.  It's got plenty of crowd-pleasers, including the title track 'Runnin' Down A Dream', plus 'I Won't Back Down' and 'A Face In The Crowd'.  I'm quite partial to a bit of Tom Petty, so I bought it without even reading the tracklist, and can I admit to a teeny bit of sadness when I discovered that it didn't include my absolute favourite (admittedly a very predictable one): 'Free Fallin''.  It's cut across three sides of vinyl with a very cool etch on side 4 (impossible to get a decent photo of it without me and my phone reflected in it too, so you'll have to just take my word).  And there are plans to release the rest of the series too, it's available for pre-order via her website, with release dates to be confirmed.  Volume 2 is Southern Soul: From Memphis To Muscle Shoals and includes her versions of iconic songs such as 'Take Me To The River' and 'I Can't Stand The Rain'.  Later themes include Bob Dylan, Sixties Country, Christmas and The Rolling Stones.  Much to enjoy over the next few months it seems. 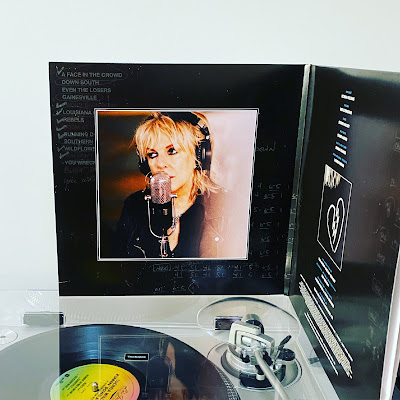 Discovered the folk gem The Time Has Come by Anne Briggs on Earth Recordings via Reveal Records just over a week ago.  It's a new gold vinyl pressing of an album that turns fifty this year and still sounds beautifully fresh.  There is so much detail in the package, with liner notes by Colin Harper on the inner sleeve, and little vignettes by Anne about each song on the back cover, such as 'Highlodge Hare': "Highlodge is where the hare lived.  He's not there any more, and so this is a commemoration, for he truly deserved one".  Anne spent much of the latter half of the sixties and the early seventies touring the UK and Ireland, but since then slipped away from the music industry to focus on her family and her life in Scotland.  This album was originally reissued by Earth in 2017, at which time the going rate of an original copy of the album on vinyl was about £500.  Very nice to see the 50th anniversary appropriately marked with a gold disc. 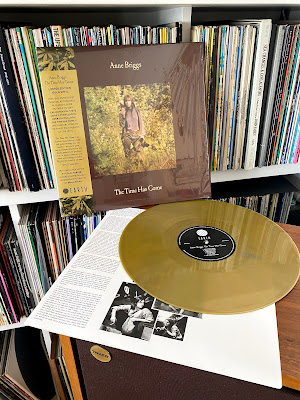 Emmylou Harris' Wrecking Ball was reissued on vinyl last November and featured here at the time, and this week sees a deluxe CD version being re-released.  Originally reissued back in 2014, this is a repackage of the album plus the 'outtakes' disc of thirteen additional tracks.

The reissue of PJ Harvey's Uh Huh Her is out next Friday with its accompanying demo album - and the demo version of 'The Letter' was released this week in advance of it.  Expect to see more on this in next week's blog post. 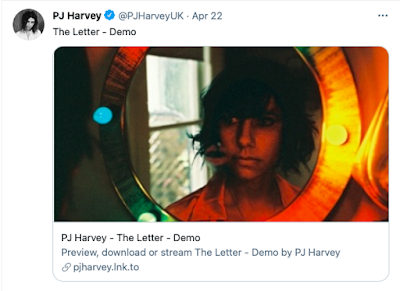 Although not a reissue, occasionally I like to mention new albums by women in this blog.  And Imelda May's new album 11 Past The Hour is one of those.  Last Monday night, I was flicking through Instagram and saw a post by Imelda which said: "Not so long ago I was told by people in the music industry that as I was a woman over 40 years of age that I was wasting my time still making music".  Well, I was incensed by this.  Incensed, I tell you.  The album features a number of guest artists, including Ronnie Wood and Noel Gallagher, and can you imagine anyone in the music industry saying to either of them that as they are over 40 years of age that they are wasting their time?  I didn't waste my time counting up the number of albums released by them both since they reached the age of 40, but it is not insignificant (and Noel Gallagher only started his solo career when he was in his forties).  Anyway, in a moment of solidarity with Women Over 40, I put the album on Spotify there and then on Monday night.  And it's really, really good.  The plan was to stream it once and feel like I'd done my bit, but I found myself replaying it.  Within an hour I'd ordered the vinyl, and it's been a staple on the speakers in my house this week.  Worth mentioning that former Ash guitarist Charlotte Hatherley also features.  Utterly delighted to see Imelda claim the number 1 spot in the Irish albums chart this week and a very respectable number 6 in the UK.  Clearly not wasting her time at all... 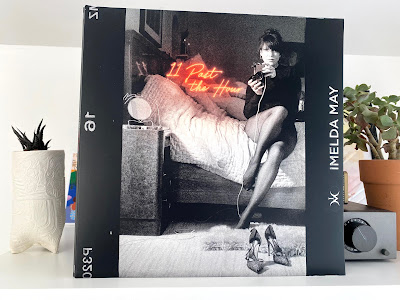