Just a couple of "regular" reissues to mention this week and then it's all about Record Store Day... 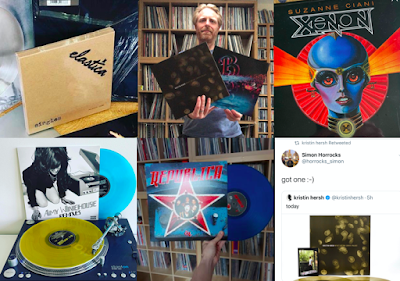 Jessie Ware's What's Your Pleasure was originally released a year ago to much acclaim and chart success.  There's a great review of it in The Guardian by Laura Snapes, who refers to it as part of the 'grown up disco' genre alongside Robyn - and it really is exactly that.  It's a glorious album, and the eight additional tracks added to The Platinum Pleasure Edition which was released this week feel like a perfect continuation. Recent advance singles 'Please' and 'Hot N Heavy' are standout of the bonus tracks, and it also includes the 2018 single 'Overtime'.  But my favourite song of the twenty is 'Remember Where You Are', released as a single in February of this year. 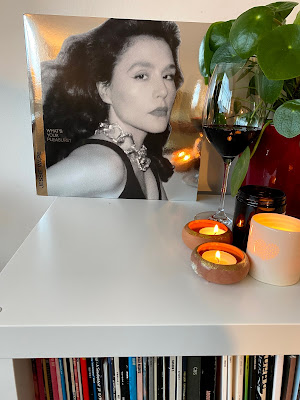 I ordered the 2LP mirror board vinyl version which is just a delight to behold, and pre-ordering direct from Jessie's website I also got a signed print (love a signed print).  My husband said that it looked like I was setting up a seance the other night when I used candles to hold down the corners of the print so I could take a photo.  It's available on CD and digitally too. Highly recommended listening. 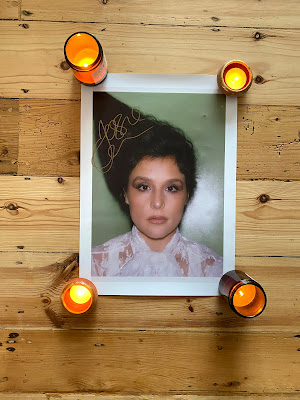 Out next week is the 10th anniversary reissue of Lady Gaga's Born This Way, which features a bonus disc of covers of each of the album's tracks by other artists.  Kylie Minogue's version of 'Marry The Night' was released from it this week.  It's a good week for songs to dance to!

But the main place to get reissues by women this week was amongst the Record Store Day exclusives that came out for what was called 'Drop 1' on Saturday ('Drop 2' being a second batch which happens on 17th July).  Despite only 20% of the list featuring female artists, there were some excellent titles available, and the one that was top of my list was the Andrew Weatherall mixes of Warpaint's 2010 album The Fool.  When I woke up yesterday morning and saw on social media the extent of some of the queues for shops, I did start to panic a bit that we had planned to go shopping in the afternoon, but the good people at Sister Ray in Soho still had a copy when I got there.  It's a 2LP package, pressed on gold vinyl, with a reworking of the original cover image, beautiful gold foiling on the sleeve lettering and very cool triangular die cuts on the inner sleeve that makes it all feel properly exclusive/collectible.  And this version of the album is just excellent, and it's not available digitally (which is always a bonus for a Record Store Day release).  I definitely chose well, if I do say so myself. 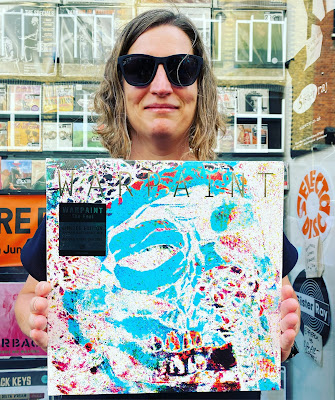 I was interested to hear how others felt about their choices so I asked some of the music and vinyl community on Instagram to contribute their thoughts on the releases by women that they picked:

"Record Store Day 2021 was quite an exciting moment for me as this amazing Belly album finally got a UK release having been released in the US last year. It’s a wonderful piece of many of the B sides from the Belly back catalogue. One my absolute favourites being a cover or 'Trust In Me' from the Jungle Book as Tanya Donnelly’s vocals are just so wonderful. I’ve been such a massive fan of this band and her solo work from the first time I heard them in the early 90s. The other female artist I picked up was from Kristin Hersh. I’ve always found Kristin’s music so very moving and I adore her vocal style. This album is the first release for this on vinyl and like all of her recent albums has an accompanying book of stories and poetry that compliment the music. Her writing is so personal and from the heart (or that’s how it sounds to me) that it really is a small window into her psyche." 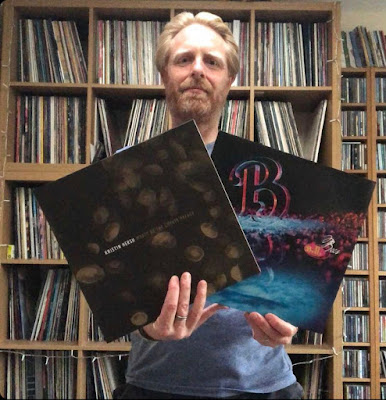 "I’m one of those imaginative folks who will tell you that every day is Record Store Day. My bank balance will also tell you that. When RSD rolls around, though, I usually manage to pick up a couple of gems.  Today’s haul included the ‘not quite first-time on vinyl’ release of Wyatt at the Coyote Palace, a brilliant collection of songs by one of my all-time faves, Kristin Hersh. It originally came as a small hardback book with 2 CDs; this sounds a bit like an RSD gimmick in itself but, as Kristin is such a brilliant writer with several tomes to her name, the format made complete sense to me. Will definitely get the book out when I’m spinning the gorgeous golden records." 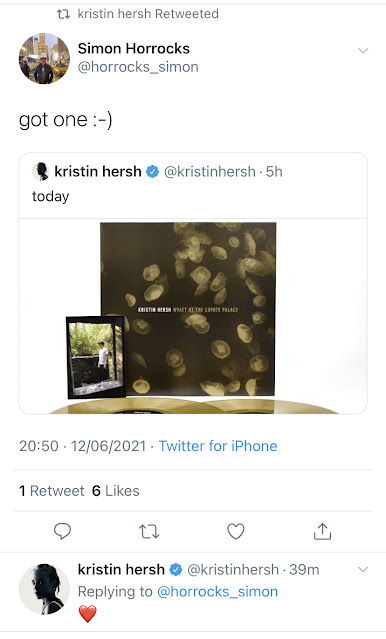 "Justine Frischmann was so influential in British music in the early 90s and rarely gets her due. The focus of the press at the time was always on the men in her life and yet without her musical and sartorial influence, neither of their bands would have been as successful.  Elastica’s first four singles were perfect; a run of short, sharp punk-pop songs that owed a debt to Wire, Blondie and The Stranglers, they were one of the tightest bands I’ve ever seen live and had an insouciance as endearing as it was studied." 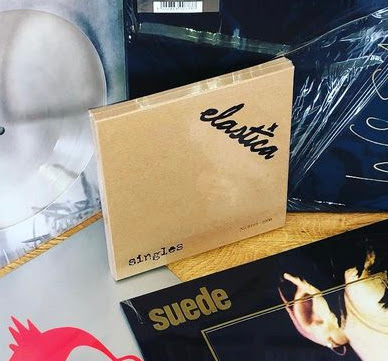 Iain - idwakefield and founder of The Record Collector's Club - Republica Republica:
"Republica's self titled debut was a record on my want list for a long time and when I saw it was being reissued for Record Store Day, I was over the moon. It's a superbly put together reissue on blue vinyl with a numbered, textured sleeve. The album itself is excellent with a mix of indie and pop vibes throughout. The songs, written by singer Saffron, are lyrically great also."  (Iain has compiled a brilliant book called World Records: Conversations With Record Collectors Volume 1 which includes the collections of fifty vinyl enthusiasts around the globe and is due out very soon). 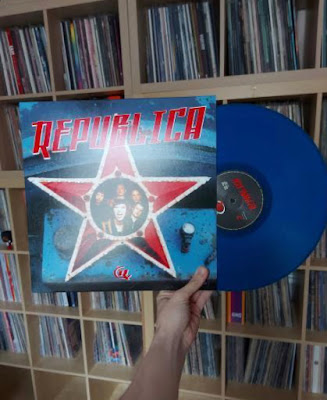 John - nerdigt - Amy Winehouse Remixes:
"For me this was the only release that really peaked my interest. Love the Amy Winehouse sound and always on the look out for a release with songs I like with a different touch from other musicians." 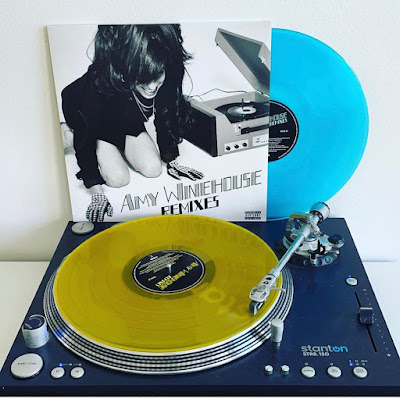 "I love RSD and the attention to detail given to the products released. To get that level of focus on a female pioneering artist is rare. Suzanne Ciani has a fascinating story, which has been underlined by the Sisters With Transistors documentary this year. When a copy of the single was still available at Rough Trade in Bristol today it was a no brainer." 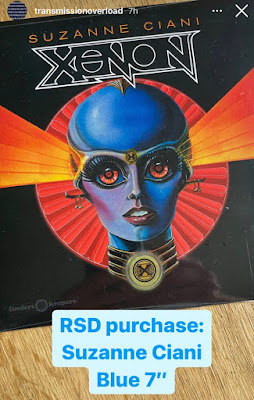 Arminda K - armindak - Suzanne Ciani Xenon:
"The most coveted release I got from today’s Record Store Day drop wasn’t actually something I purchased with my own hands, but rather was procured through the kindness of a friendly interaction online, where small music communities can thrive regardless of post code. #1 on my list was getting Suzanne Ciani’s Xenon 7” picture disc, and the main reason I had dragged myself out of bed to get into the Flashback Records queue on Essex Road in London by 8:30am. After seeing the last copy get handed to a nice enough looking gent two spots in front of me, I was kicking myself for not getting out of bed earlier.  In parallel, I was having a friendly Instagram chat with David from transmissionoverload about our excitement for RSD, and what we were hoping to find. He knew Ciani was my top pick. When he found out I had missed my chance, in a truly selfless act he offered his copy to me as a trade for some of my existing music releases on tape/vinyl.  Ciani's talent is awe-inspiring. I am the kind of person that is obsessed with listening and watching analog synth music/videos, but terrified of actually diving into that world. Keys are still my safety-net and I only experience it vicariously. Not too long ago I  had seen a behind-the-scenes clip of Ciani working on the Xenon soundtrack, and it was a joy. Her presence has this glowing quality and it permeates through her music. And soon enough I’ll have that 7” spinning on my record player. Hopefully David doesn’t end up missing it too much!

Friend of the blog Daryl Easlea was busy spinning records at the Dansette Disco at Fives in Leigh On Sea yesterday and although he didn't pick up any Record Store Day releases, knowing how much I love a good statistic, he very kindly sent me the gender breakdown of records played by all four members of the quartet Middle Aged Spread across the day instead.  105 45s played, 24 by women, which works out at 22.8%.  Above the general 20% industry threshold for women to men...  Look forward to seeing what the breakdown of the Dansette Disco is for RSD Drop 2 next month! 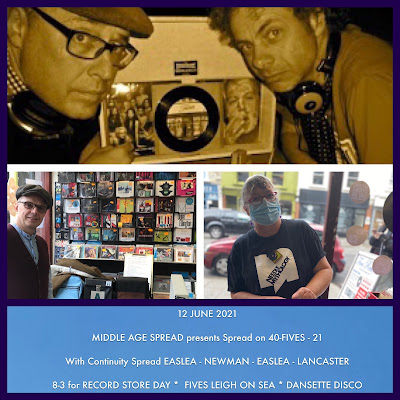