Listening to ‘Madame X - Music From The Theater Xperience (Live)’ this week, I was expecting to like it (because Madonna), but I was not prepared for the strong emotional reaction that came with it. I saw the Madame X tour at the London Palladium in February 2020 and it was the last big gig I went to before the world changed. Leaving that show with a warm glow and a group hug photo (once we got our phones back), little did any of us know what awaited in the weeks and months that followed. Most of all, listening to this was a stark reminder of the in-person connections that have been missing for eighteen months and the friends I used to see so often for years that I haven’t seen face-to-face since (not least due to post-covid caution on my part). For anyone reading this far and waiting for me to get to the point about what the live album is actually like, as the name suggests, songs from the album Madame X are dominant - my personal favourites are ‘I Don’t Search, I Find’ and ‘Come Alive’. And it’s peppered with mega-hits from her catalogue, including ‘Like A Prayer’, ‘Vogue’ and ‘Frozen’, with uncredited snippets like 'Express Yourself' and 'Rescue Me' also turning up. Stating the obvious perhaps, but I always think a live album is “better” when you have seen the tour in question so I’ve been playing it a lot.  I missed the live broadcast of the accompanying concert film on MTV the other night, but I'm very keen to check it out if I can find it on demand as the show was so visually captivating (and I have no photos to remind me other than those taken outside the show!). 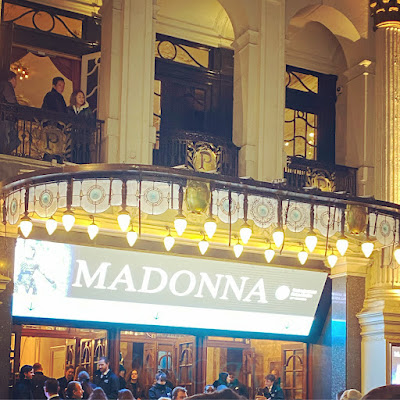 “Thirty Eight pounds!”  Those were the words echoing around my local park after Saturday’s parkrun as my friend Sam and I discussed the new Reba McEntire collection Revived Remixed Revisited. The digital version came out this week, with a 3 CD collection due to hit U.K. stores on the 22nd, and it was the latter that was the cause of the exclamation on price. I can’t find images of the package from which to derive a concrete opinion on the thirty-eight quid, but I’m going to give Reba & team the benefit of the doubt that it’s going to be suitably lovely and in-depth.  In defence of those who make CDs (myself included, despite my exclamations in the park), manufacturing and freight costs have shot up in the last year - worth remembering it impacts CD as well as vinyl.  Anyway, back to the music - Revived Remixed Revisited is just under two hours long across thirty tracks in total, and - as the name would suggest - it is split into three parts (with ten songs in each). My favourite of the three is Remixed - especially the Tracy Young remix of 'Turn On The Radio' and Dave Audé’s mix of ‘I’m Gonna Take That Mountain’ (which had a slight undercurrent of Madame X’s ‘Medellin’ about it to my ears).  I was listening to this part of the collection on a Ryanair flight back from a funeral last night and it just made me really want to lose my shit dancing up and down the aisle.  I was sober, and I’m a brutal dancer, so this wouldn’t really have been a good idea.  The afore-mentioned Sam is a big fan of Reba and quite the expert on her catalogue so I have really enjoyed sharing thoughts about this collection as we both listened to it over the last few days - he even sent me a photo of his original CD single of 'You Keep Me Hangin' On' from 1996, Reba's first foray into the world of dance music (as shown below).  Revived features re-recordings of songs as they have evolved as part of her live shows (she has just announced a tour, and will feature an all-female line up of opening acts.  Yes Reba!), and Revisited presents a more stripped back approach to the songs, including a new duet with Dolly Parton on the song 'Does He Love You' from 1993.  Sam suggested that it would have been good if Reba had sung the other vocal line this time for a change.  I think Sam should work in catalogue A&R... 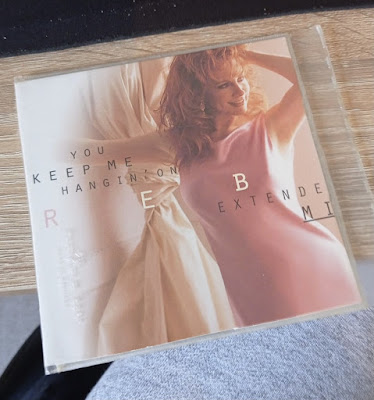 My vinyl purchase this week was Sharon Van Etten's reissue of Remind Me Tomorrow for Love Record Stores Day.  It was dispatched by Reflex Records early last week but it sadly still hasn't arrived (along with a load of other things that are no doubt sitting in the local sorting office).  So that will have to feature next week and instead I'm sharing with you the lovely comment that Sharon left on my Instagram post sharing a photo of her epic ten reissue last week which made my day.  There's only one thing better than a signed print, and that's a lovely message from the artist about said signed print...!

Another vinyl reissue this week is an album I have been listening to digitally over the past few weeks - Kathleen Edwards' debut album Failer from 2003.  'Alt-country' seems to be the genre description that crops up the most about this one, which was nominated for multiple Canadian Juno Awards (including Roots & Traditional Album Of The Year and Songwriter Of The Year), and there's a lovely piece on Instagram about the story of this record.  I dithered about ordering it on vinyl (it's pressed on lovely translucent orange) and didn't (yet) because it seems that it's only available direct from Kathleen's store in the US and the shipping charges are almost the same cost as the album itself.  Will be keeping an eye out in the hope that there's a UK store option soon.

Also out this week:
The Essential T'Pau - a 3CD collection from the same series as The Essential Sugababes featured last week.  My personal favourite T'Pau song is 'Heart And Soul' so I have added that one into the Reissues By Women 2021 Spotify Playlist alongside a selection of songs from all of this week's featured releases.
Another remix from the Nina Simone Feeling Good: Her Greatest Hits And Remixes collection, this time 'Sinnerman' remixed by Sofi Tukker.
A performance of 'Stop Your Sobbing' by Pretenders from the Kid Jenson show on 5th February 1979 - Pretenders and Pretenders II will be reissued in November, expanded to 3CD editions, curated by Chrissie Hynde.
And another track from the forthcoming Archives - Volume 2 box set by Joni Mitchell: 'You Can Close Your Eyes' was written for Joni by James Taylor in 1970 - they performed a duet of the song together at a benefit concert in London a few months afterwards, and it has been released this week, more than five decades later.
It's National Album Day next Saturday, and the theme this year is "celebrating women in music" so I'm expecting lots to talk about on that subject over the next week or so.  Check out this year's special releases here, and the BBC have curated some excellent programming across TV and radio to tie in with it which I'm hoping to tune into - and you may wish to do likewise!