Reissue of the week goes to Sugababes and their 20th anniversary release of their debut album One Touch, their first and only for London Records.  Readers who are versed in the Sugababes catalogue will know that this year is actually the 21st anniversary of the album, but global pandemic, vinyl industry in chaos etc... Opening side A with first single 'Overload' and closing side B with third single 'Run For Cover', it's a remarkable debut album by a female trio who were only in their mid-teens at the time.  Pre-ordered back in May when it was first announced, I went for the limited edition deluxe tricolour vinyl version.  This is one of the classiest vinyl packages I have seen in a while.  The gatefold sleeve has a matt finish with the original cover in spot gloss in the centre and the name and title in gold foil.  The inner gatefold features liner notes and a photo gallery, and houses a 12" print of the band, and the afore-mentioned tricolour disc in a printed inner sleeve.  I got into a debate on Twitter last week about printed inner sleeves versus plain polylined (the former can be notorious for their paper residue) but in this case the printed inner contains some very heartwarming words from Keisha, Mutya and Siobhan so you wouldn't want to be without it.  The album comes with a download card which has access to 23 bonus tracks - my poor computer can't cope with any more stuff on it, so I have been checking those out on Spotify instead.  Included are some of the excellent advance remixes that have been released (and featured here) over the past few months, plus b-sides and alternative versions.  I ordered early enough to get a signed CD of 'Overload' too.  I remain always grateful to artists who take the time to sign things, it really does make the recipient (ie me) feel special. And unless I am very much mistaken some of the songs on this signed 'Overload' CD are not available on streaming services which makes it a lovely collectors' piece. 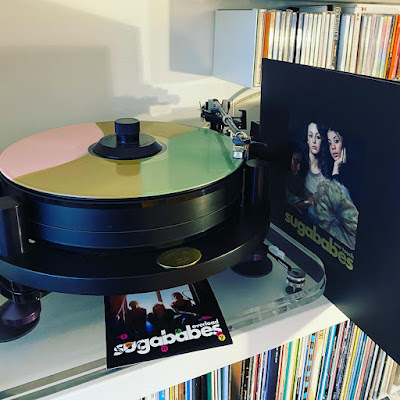 Also out this week via UMC is a 3CD collection called The Essential Sugababes.  It picks up the story with 'Freak Like Me', the first UK number 1 single for Sugababes 2.0 after they signed to Island.  It's currently just a fiver on Amazon, and exactly the type of thing that I would have said was 'great for the car' - except the last time I said this in a meeting someone said disparagingly "how old is your car?" (the answer is that my car is non-existent so I actually have no clue what in-car music systems look like nowadays).  And also the current fuel crisis ridiculousness probably isn't conducive to recommending anything to do with cars.  So let's leave it that you might want to listen to it wherever you might have a CD player...

Nashville country singer Caitlin Rose's album Own Side Now was new to me this week, following the release of a 10th anniversary reissue with 2 bonus tracks (for vinyl lovers, these are on an additional 7" that comes with a clear vinyl pressing of the album).  It was the digital version for me for immediacy - I took it on my walk this morning and it was a really delightful listen.  Favourite tracks are 'For The Rabbits', 'New York' and bonus track 'Whatchoo'. 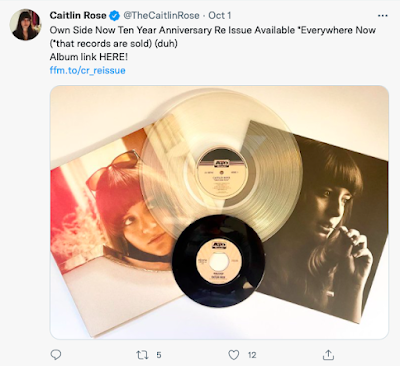 Mind you, if speed was the aim of my walking game this morning (it wasn't!), I reckon I probably could have walked a bit faster had I been listening to some of Belly's Bees.  A 19-track collection compiled by the band to celebrate 30 years, it was originally released for Record Store Day back in June and is out on CD and digitally this week.  It includes b-sides and "oddities", including covers of Tom Jones' 'It's Not Unusual' and Jimi Hendrix's 'Are You Experienced'.  Belly were very much a part of my early nineties listening, and this is a lovely reminder of why. 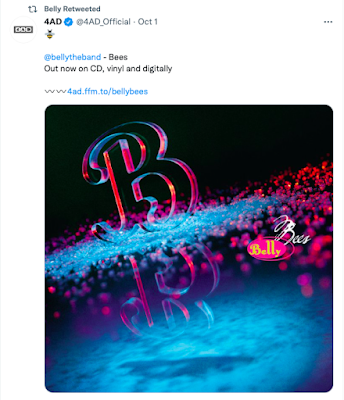 Spice Girls gave us another advance single this week from their Spice 25 release due out at the end of the month - this time it's the Unlimited Groove Mix of 'Love Thing'. 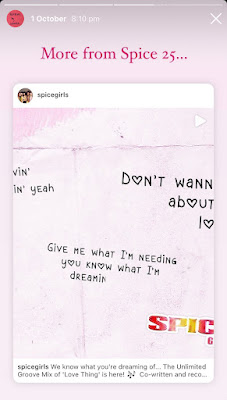 The vinyl format of Taylor Swift's Fearless (Taylor's Version) is out this week, it's a 3LP, pressed on gold vinyl and features her re-recording of her 2008 album plus 6 extra bonus tracks.  Digital and CD formats came out earlier in the year, and for anyone not familiar with why Taylor Swift is covering her own songs, there's a digest here.  The next album in the "Taylor's Version" series will be a re-recording of her 2012 album Red which is out on 12th November, and will also be accompanied with 'From The Vault' bonus tracks.  Proof of Taylor Swift's clout - it was originally scheduled for release on 19th November but has been moved a week EARLIER (caps, bold, underline).  In a climate where vinyl pressings are delayed for months and years (as discussed in this really good blog post by Norman Records), this earlier date really is no mean feat.  Speculation is that this is due to Adele dropping her 30 album on the 19th (and hats off to the Jedward lads for owning that teaser campaign on Twitter over the weekend). 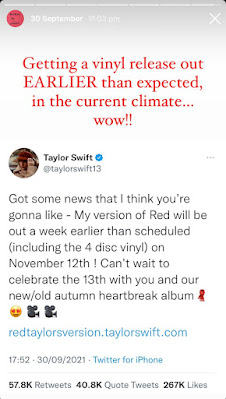 Now it's only the first release week in Q4, the first week of October, but already the Christmas albums are starting to make some noise.  Vinyl reissues of 'holiday' albums by Whitney Houston and Christina Aguilera appeared this week, and Norah Jones announced on Friday that her first Christmas album - I Dream Of Christmas - will be released on 15th October.  Blondie are waiting until next week for their 'Yuletide Throwdown' digital release (with vinyl on 5th November).  Expect to see a smattering of songs from all of these in a refreshed version of the very popular Reissues By Women Christmas Playlist in due course (by which I mean on 1st December). 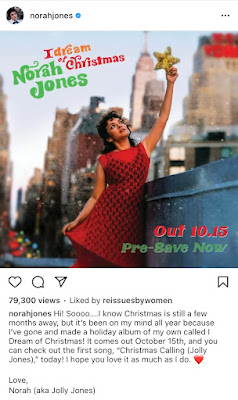 Speaking of playlists, the 2021 Spotify Playlist has been updated as always with a few tunes from this week...