Katie Melua released her eighth studio album - appropriately titled Album No. 8 - in October 2020, and it was a UK top ten hit.  This week she released Acoustic Album No. 8, which (as the name suggests) is stripped-back reworkings of the original album tracks, along with an additional acoustic version of 'No Better Magic' (originally a bonus track on last year's deluxe edition format).  It's an absolutely gorgeous collection of songs, that strikes just the right balance of gentle in acoustic form whilst still having depth and dimension to it.  I loved the relatable references to it getting dark at 4pm in 'Voices In The Night' and have to admit that 'Heading Home' reduced me to tears, having been prevented from "heading home" last week due to covid.  Acoustic albums are not always my go-to thing (I had a tendency in my youth to roll my eyes at the type of bloke who turned up at a party with a guitar and wanted to play 'Blackbird' in the corner), but I really loved this one.  Also discovered this week that Katie has a recently-launched podcast series with Polly Scattergood called The Detail - currently listening to and enjoying this week's episode which features Shura and some interesting chat about record label advice ("they're all making it up as they go along" had me smiling...). 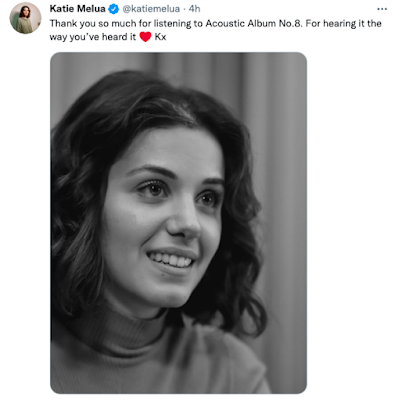 Hot on the heels of the expanded reissue of Debbie Gibson's debut album Out Of The Blue featured last month, is the deluxe edition 3CD/DVD deluxe reissue of her 1989 follow-up Electric Youth.  As mentioned in Debbie's notes in the booklet that accompanies this collection, the title track is "a song about not dismissing a young person's ideas because he/she is just a kid".  Debbie wrote the songs for this album in her teens, and produced many of them too.  Fast forward to 2021, and she has recently re-recorded one of them - 'Lost In Your Eyes' - with New Kids On The Block's Joey McIntyre for her latest album The Body Remembers, after performing the song as a duet on NKOTB's 2019 tour and more recently in a run of Vegas shows.  A reminder of the enduring legacy of this music.  Like the first album in the series, the reissue of Electric Youth is full of bonus tracks including alternative versions and remixes (I was listening to CD2 at dusk the other day with only my computer as a light source in the room and the deep voice that utters "This is the house" which features across the Shep Pettibone remixes of 'Electric Youth' absolutely scared the bejaysus out of me as I wasn't expecting it!).  The DVD includes the Live Around The World concert, originally released on laserdisc and much-sought-after by fans.  Debbie also has a brand new single out - 'Christmas Star' - which you can expect to feature in the Reissues By Women Christmas Spotify playlist in all its updated glory tomorrow morning.  And for those looking for a longer read about Debbie, there's a great piece in the Guardian this week by Sylvia Patterson.  Debbie's name also cropped up in the book Anything For A Hit: An A&R Woman's Story Of Surviving The Music Industry by Dorothy Carvello which I have been reading - apparently Debbie received a gift of a baby grand piano from her record label which was charged back to her (this is probably the least awful example of poor treatment of women in that book but it still makes me feel a bit sad on her behalf...). 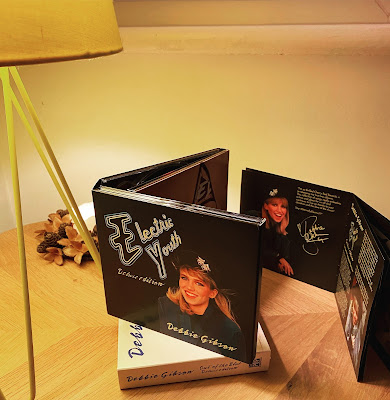 The other CD set on my stereo this week was Jaki Graham's 35th Anniversary Collection, a high gloss box set containing her mid-eighties albums Heaven Knows and Breaking Away, plus accompanying bonus discs for each.  Pressing play on CD 1, the opening bars of her top 10 hit 'Round And Around' transported me instantly right back to my Top Of The Pops-watching days.  The collection also includes her singles 'Set Me Free', 'Breaking Away', 'Step Right Up' and her two duets with David Grant - 'Could It Be I'm Falling In Love' and 'Mated' - as well as multiple remixes of each and more (many of which were only previously available on the original vinyl singles), plus two previously unreleased tracks. And Jaki has been back on our TV screens regularly again in 2021 as a contributor to the Channel 5 series Britain's Favourite 80s Songs and its follow-up about the 90s - both of which were an absolute slice of Friday night joy in our household during the very worst of the lockdown grimness. 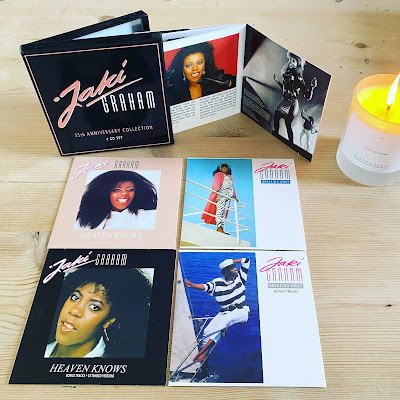 La Roux contributed a cover version of 'Damaged Goods' to The Problem Of Leisure: A Celebration Of Andy Gill And Gang Of Four which was released in June this year, and she has now released an EP of 'Damaged Goods' remixes this week via digital services.

An honorable mention for Roxette's Joyride which has a 30th anniversary reissue out this week.  I say honourable because although Marie Fredriksson had an iconic female voice that was very present across radio in the late 80s and early 90s, obviously Roxette were a duo and Per Gessle is equally audible on this album.  Regardless, I loved a little trip back in time with the hits such as 'Fading Like A Flower', 'Spending My Time' and 'Church Of Your Heart', and there are remixes, demos and live tracks amongst the bonus discs. 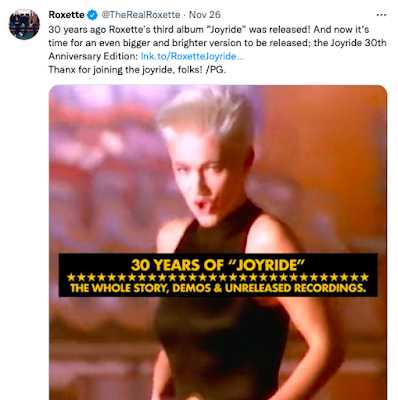 It was Black Friday this week, and as much as I am a big supporter of Record Store Day Black Friday in terms of encouraging people to visit independent record shops, the planets did not collide for me this week to facilitate that in person.  But I ordered Carole King's In Concert: Live At The BBC, 1971 online on Saturday from Sister Ray (stock still available at time of writing) and I'll share it when it arrives!  Dusty Springfield's The Complete Atlantic Singles 1968-1971 was also on my list, but appears to have been a big seller and all of the stores I looked at were sold out.

See you in the morning for the start of Christmas...!