"Maybe this thing was a masterpiece...," Taylor Swift sings in 'All Too Well' from her album Red and I would have to conclude that there is no maybe about it whatsoever.  Watching the campaign for Red (Taylor's Version) unfold over the last few days has just been nothing short of jaw-dropping.  The general rule for streaming is that shorter versions of songs get more streams - a bit like the radio edits of old.  Not in this case.  The '10 Minute Version' of 'All Too Well' which closes Red (Taylor's Version) is many millions of streams ahead of its next nearest rivals on Spotify. (Speaking of Spotify, last Friday, Red (Taylor's Version) broke the record for the most-streamed album in a day by a female artist and Taylor broke the record for the most streamed female in a day in Spotify history).  And there is a short film version on YouTube which has 10 million streams more than the Spotify version as at the time of writing.  And in fairness, it is utterly brilliant. 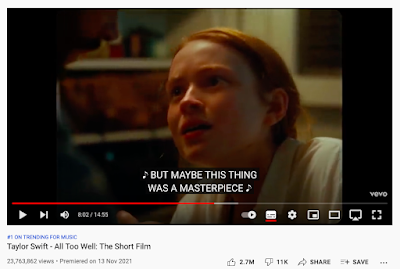 Writing about Taylor Swift reissues always makes me a bit nervous.  Although "bragging" about being a music anorak on Instagram last week, I'm not what would be considered a Taylor connoisseuse, and although that doesn't stop me with lots of other artists there is something about the Swifties that makes me very afraid to put a step wrong!  I don't think I have ever seen social media coverage of any reissue by a woman (possibly any reissue by anyone) to the degree that Red (Taylor's Version) impacted this week.  I went in for repeated listens in different settings, just to make sure that I was absorbing it all properly (on the first listen, my 11 year-old son who was baking as I played it commented that Taylor had a lot of feelings!).  And I concluded that this may be some kind of equivalent of what Alanis Morissette's Jagged Little Pill was for me some decades previously.  I went down rabbit holes reading about Easter Eggs in the short film (well worth the time, people, well worth it), and I haven't yet even mentioned that it's got Phoebe Bridgers on one of the 'From The Vault' tracks.  There is just so much to get into here, it's no wonder people were talking on Twitter about getting no work done as a result of this release.  It's a mark of Taylor's immense clout that when Adele's album was announced for 19th November, originally the announced release date for Red (Taylor's Version) that she was able to move the whole thing a week earlier, VINYL AND ALL.  I don't know of anyone who is moving vinyl release dates earlier these days.  And a little part of me wondered why she wouldn't just brave it out on the 19th, but moving it to November 12th has meant she is on target for her tenth number one album in the US, and quite frankly well done her.  And I am desperate to say something about that scarf but quite frankly Dionne Warwick nailed it on Twitter last night so I'm sharing what she said instead: 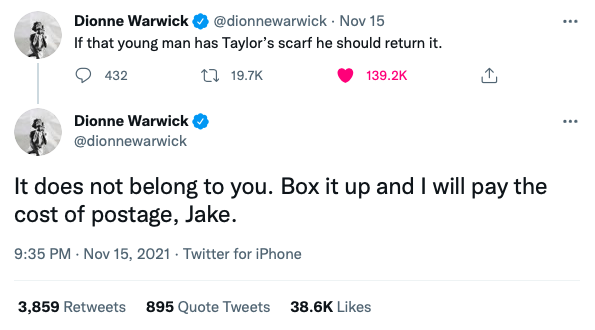 It's a week of absolute heavyweights, with the grand-dame of catalogue, Joni Mitchell, releasing the second in her Archives series, just over a year after the first.  Like Vol. 1,  Joni Mitchell Archives; Vol. 2: The Reprise Years (1968-1971) is an expansive 119 tracks across five CDs/digital components, with a 10LP vinyl equivalent coming in February (For those who want vinyl in the meantime, there's a breakout of the 1969 Carnegie Hall show across three discs, pressed on either black or white vinyl).  And again, the approach is flawless here - including demos, session tracks, live recordings (with intro chat included for historical relevance and authenticity). It's five and a half hours in length, so I am still working my way through it, but I'll admit that I did have a little jump to the end to check out the version of 'Big Yellow Taxi' from the BBC Session at the Paris Theatre in October 1970 (complete with intro) which is expectedly lovely. 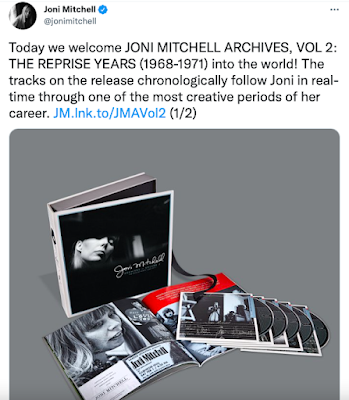 My vinyl choice for this week is actually one that was due to come out in early September, but got delayed.  And it has been worth the wait.  Hopelessness by Anohni was first released in 2016 and reissued this year on limited edition pink glass vinyl as part of the Secretly Canadian 25th anniversary celebrations.  The reissue features new cover artwork and an obi-strip which describes the album perfectly: "Anohni's Hopelessness arrived like a violent quake, one artist's best attempt to force our eyes toward what we could not face".  The album - her solo debut - was nominated for the Mercury Prize in 2016, and Anohni was nominated for Best British Female at the Brit Awards in 2017.  Proceeds from this version are going to the organisation New Hope For Families, that provides housing and other support services to unhoused families in Bloomington, Indiana - the label's hometown.  I got my copy from Norman Records and they still have copies as at time of writing.  It's hauntingly beautiful and highly recommended. 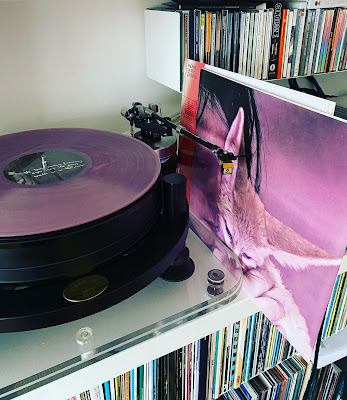 Kylie Minogue's 2020 studio album Disco is reissued with bonus tracks as Disco: Guest List Edition.  Disco was Kylie's 8th UK number 1 album, making her the first female artist to have a UK number 1 album in five consecutive decades.  As the name would suggest, it includes new duets (with Years & Years, Jessie Ware and Gloria Gaynor), as well as a host of remixes.

Shakira's Laundry Service turns 20 this week.  Originally released on 13th November 2001, this was her fifth studio album, but her first where the songs were predominantly in English.  The expanded Washed And Dried edition, has the mega-hits 'Whenever Wherever' and 'Underneath Your Clothes' in multiple forms, and including a new addition of her Super Bowl half time performance, was released digitally this week to mark the 20th anniversary.  My favourite track on this album though is 'Poem to a Horse' which I have added to the Reissues By Women 2021 Spotify Playlist this week.

This year Little Mix were the first female group in the history of the Brit Awards to win the 'Best British Group' award, and this week they have released a new collection called Between Us which features all the hits (18 previous singles) plus 4 new songs (or 5 if you go for the deluxe!).

Paramore's debut album All We Know Is Falling has been pressed on silver vinyl as a limited edition reissue for the Fueled By Ramen 25th anniversary celebrations.

And Rihanna released a set of high-end coloured vinyl plus t-shirt box sets, suitably titled Rih-issues, for each of her studio albums.

Finally, Light In The Attic Records have been doing some really excellent catalogue releases by women this year, and this week announced the latest - a 50th anniversary reissue of Karen Dalton's In My Own Time which comes out in late March 2022.  The first track to be released from the expanded super deluxe edition is an alternate take of 'Something On Your Mind'.

One more thing.  Regular readers may have seen my Women In A&R: A Snapshot piece last week ahead of the UK's A&R Awards in London.  For those interested in the outcome, the winners list is here.  The headline is that no women won in any of the 'A&R Of The Year' categories...