WOMEN IN A&R - A SNAPSHOT

Regular readers may remember that I went to the Women In Music Awards in London a few weeks ago.  And I had such a lovely time at it that I thought I might like to go to more awards events, so I set about looking at what was coming up next.  The A&R Awards.  I work in A&R so I thought that might be just the thing, but I discovered that sadly there were no awards for catalogue A&R which is a bit of a shame.   Especially as these reissues and box sets don't just magic themselves together, and I'm also going to venture that relationships with catalogue artists about their repertoire are some of the most challenging in the industry to manage.

But, as I was reading through the nominations, something else struck me.  And it is not new news, and certainly not anything that those of us who work in A&R don't already know, but it was interesting to see it there in a distilled list.  There are VERY FEW WOMEN.  Caps, bold, underline.

The roll call of nominations lends itself to quantifiable snapshots.  And so ahead of the A&R Awards event in London tomorrow night, here are the findings.

In line with what seems to be the "norm" across the industry, women make up just over 20% of the A&R nominations. 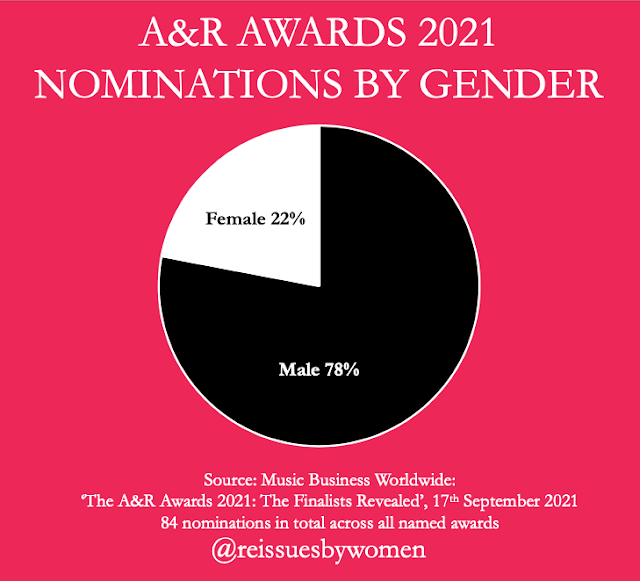 Contemporary Black Music has the best balance of the 'A&R Of The Year' categories, with 33% of the nominations for women. 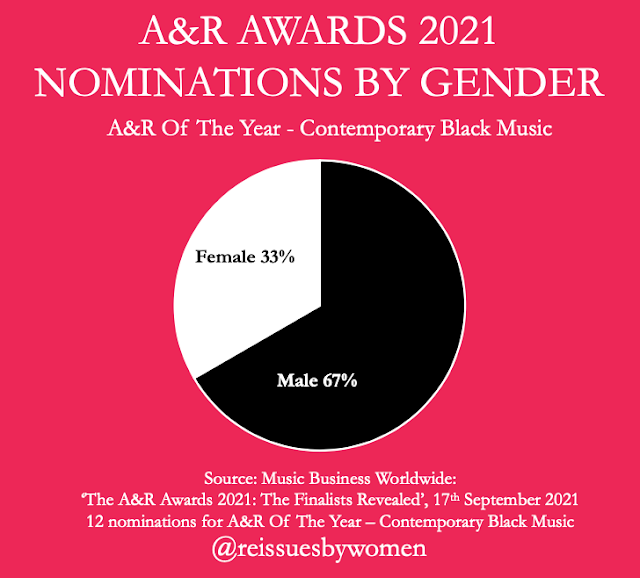 Adult Contemporary is pretty shocking and utterly depressing, it's 100% male. 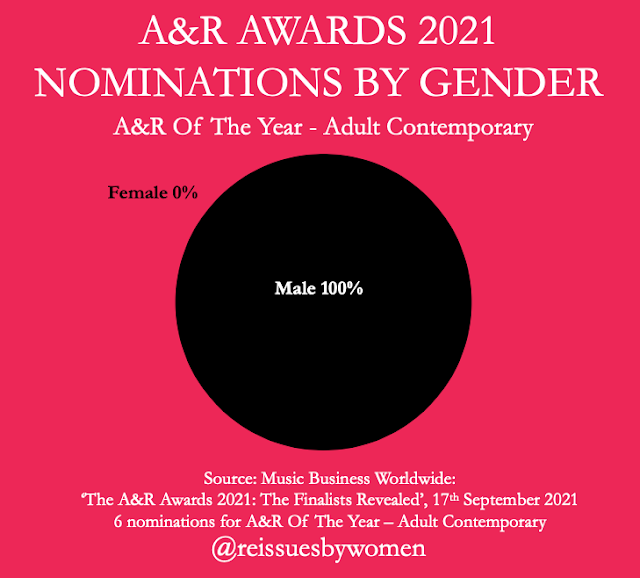 As is Electronic/Dance.  100% male here too.  (As a side note, shout out to Annie Nightingale who in the past week announced the Annie Nightingale Presents Scholarship in partnership with BBC Radio 1, which aims to celebrate and elevate talented women and non-binary people in the electronic music scene by providing them with a national platform to showcase their taste and expertise). 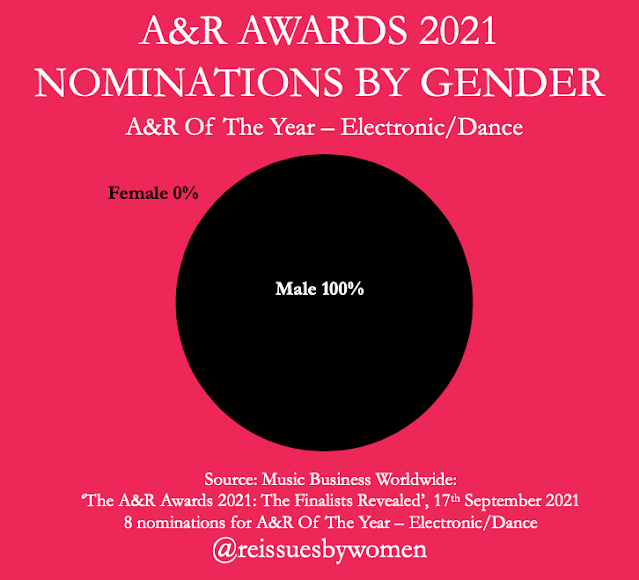 Alternative/Rock is next worst/best, depending on how we're viewing this scale - one woman out of eight nominations. 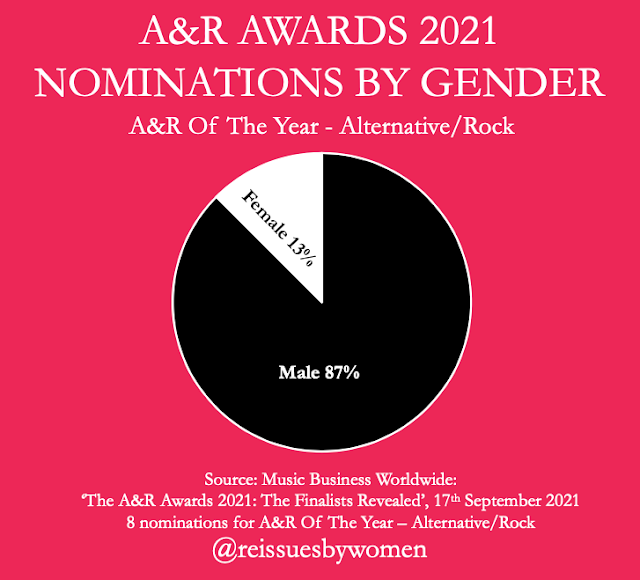 Pop/R&B starts to feel vaguely respectable in comparison, with its 25%. (A reminder though, 25% is still only a quarter). 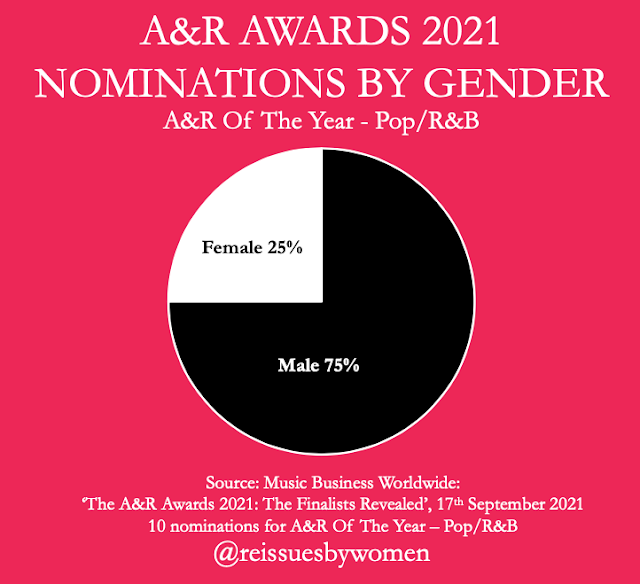 Moving on to Producer Of The Year - 10% female, one woman out of ten nominations. 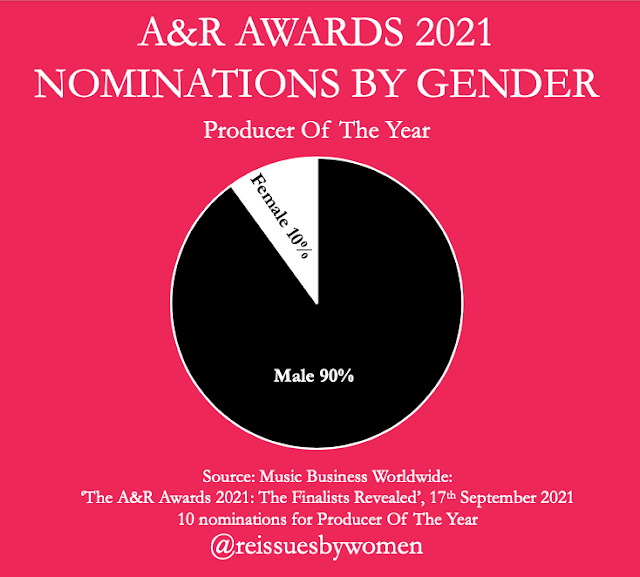 The song/songwriter categories are 'better', but hardly brilliant. 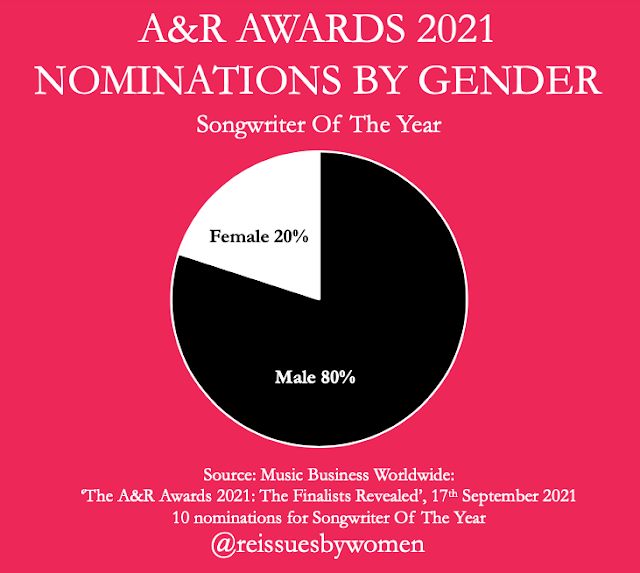 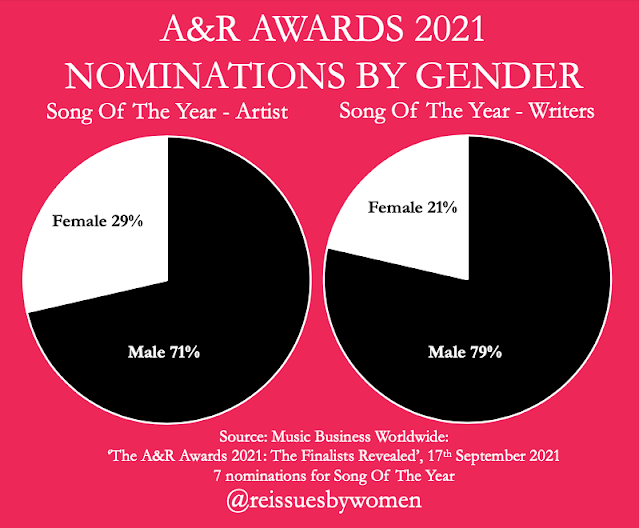 And yet women are clearly the backbone of the A&R industry.  75% of the nominations in the A&R Administrator category are made up of women.  That category is strangely missing an "of the year" accolade in its description though. So, what might be the reasons for the lack of women in A&R?  "Where are the female A&Rs?" is exactly the question asked by the Guardian all the way back in 2009.  One man ventured the following opinion: "How many female music anoraks do you know?  Girls tend to be more interested in what the band looks like on the record sleeve than how it was recorded and how it was put together."  I mean where do you even start with that?  Words that do not involve swearing are failing me, so here's a picture of me, an A&R Woman, in literally my most anoraky of anoraks instead. 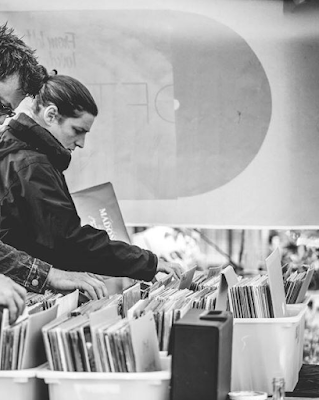 'Can't see, can't be' is a theme that crops up multiple times in this article by Billboard from less than a year ago, that also suggests that things are starting to change.  The clash of the needs of motherhood with the perceived 'out all night' caricature of a typical A&R is another factor, but the past eighteen months of living under a pandemic have proved that you don't have to be out all night (or indeed out at all) to nourish acts and make great records.  Also, many mothers that I know who have returned to work following a baby would wipe the floor with those around them in terms of their ability to manage their time and get shit done.

As with my Record Store Day snapshot earlier this year, this isn't about having a go at the organisers of the A&R Awards.  I'd like to think they have noticed the state of play when they were putting their nominations together.  But it's a status report, that hopefully serves as a reminder to those who are aware of the issue, and have the hiring power to do something about it, that their significant efforts are still very much required.  And to those who are unaware of the issue or haven't given it any thought, perhaps they may reflect on the gender balance of their team and consider whether it's where it should be.  Perhaps something for the sponsors of the awards to think about too.  A&R has been described as the nucleus and lifeblood of the music industry, it is where the music that is made available to the public is shaped.  Is it any wonder that the balance of music being released is so heavily weighted towards men if the people shaping the artists and the repertoire are predominantly men?  And is that ok?  (For the avoidance of doubt, the answer to both of these questions is "no").