The Kim Wilde hits collection Pop Don't Stop was released at the beginning of August 2021 when this blog was on a summer break and it was one of the catalogue releases I was most sorry I missed delving into during that time.  Last summer's formats were a 5CD/2DVD collector's edition and a 2CD hits package, marking Kim's 40 years in music: her debut single 'Kids In America' having reached number 2 in the UK singles charts in 1981 (still one of my favourite songs from that era), and she's since sold over 30 million records globally.  Very much worth the wait is the latest edition to the 'format suite' by way of a 3LP red and white splatter vinyl.  Forty-one tracks in all, including US number 1 'You Keep Me Hanging On', 1988's 'You Came', her cover of the Bee Gee's 'If I Can't Have You' from 1993 and the 2021 single 'Shine On' (a duet with Boy George).  I see that splatter vinyl versions of her early studio albums are available for pre-order at the moment too... 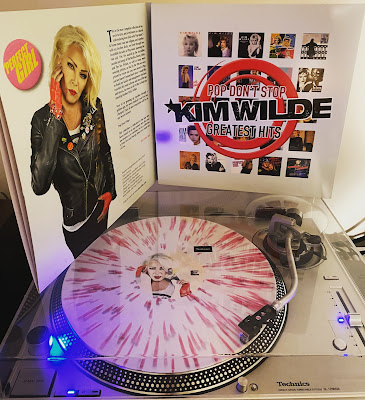 I'm pretty familiar with Bjork's solo album catalogue, but I know a lot less about the Sugarcubes, other than the singles.  So the new orange vinyl pressing of their debut album Life's Too Good (featuring the single 'Birthday') has been much enjoyed this week.  Not least because I pre-ordered it from One Little Independent thinking that it wasn't coming until 22nd April.  Nothing like an unexpected early arrival of a piece of vinyl these days! 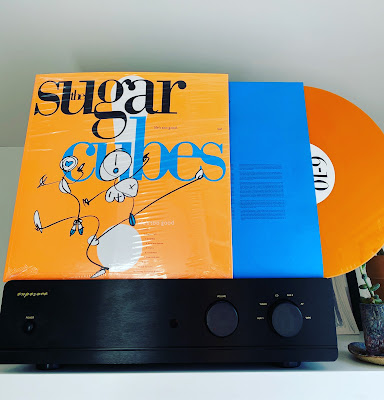 And Sonic Youth's In/Out/In arrived swiftly in the post from Rough Trade this week too so it has been a great week for vinyl collecting.  I see that Rough Trade's allocation of vinyl is sold out, but Slide and Norman have it at time of writing.  It's a five-track EP, 44 minutes in total (those of you good at maths will have worked out that this means some long tracks...), of material from 2000 to 2010, to celebrate 20 years of the label Three Lobed Recordings.  The package includes new liner notes by Brian Turner, and an obi strip with an intro by Tyler Wilcox - and I'm going to borrow Tyler's words about the record here: "In/Out/In offers listeners one of the purest distillations of the band's still bewitching sound, giving us a real-time glimpse of their collaborative creative process, spontaneous, raw and undeniably lovely".  I've just recently finished reading Kim Gordon's excellent autobiography Girl In A Band from 2015 which has been at the top of my 'to be read' pile for AGES, so this EP was very welcome in the context of that. 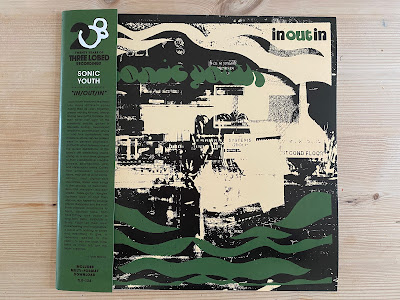 Also out on vinyl this week is Natalie Cole's Unforgettable...With Love which was featured on the blog last month when it was reissued digitally; Goldfrapp's debut album Felt Mountain as a suitably gold vinyl reissue; as well as the 4LP bookpack version of Suzanne Vega's Close-Up Series which appears to be very difficult to get hold of so I have been enjoying it courtesy of the Spotify Playlist which compiles the four albums in the series into one digital collection. The original 'extras' from the 2014 CD box set will be available as a Record Store Day exclusive on 23rd April (which brings me to a timely reminder to those of you reading who would like to contribute something to the Record Store Day edition of the blog in a few weeks' time - whether you are a purchaser, record shop owner, involved with the release in some way, or indeed a female artist with a reissue or catalogue release out this year - I'd love to hear from you !). 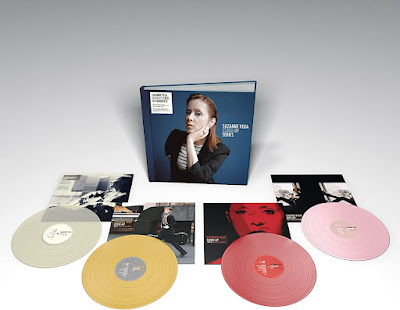 Other things being listened to digitally this week are the remastered expanded edition of En Vogue's Funky Divas which was released thirty years ago last week and contains the absolute anthem 'My Lovin' (You're Never Gonna Get It)'; the 50th anniversary reissue of Karen Dalton's In My Own Time (vinyl for this one doesn't arrive in the UK until May now it seems); the recent Marianne Faithfull 6-track EP Love & Loss featuring a cover of the Beatles' 'Yesterday'; Phoebe Bridgers' acoustic version of 'Chinese Satellite' (Live From Sound City), a charity single as part of the Secretly Canadian 25th Anniversary releases; 'Forever' by Sheryl Crow, the first track to be released from the soundtrack that accompanies her forthcoming documentary; a gorgeous cover of Kate Bush's 'Cloudbusting' by The Staves from their Be Kind EP, and just before pressing 'publish' on this today, I discovered the new Joan Jett & The Blackhearts acoustic album Changeup so dived in with a play of the reworking of The Runaways' 1976 hit 'Cherry Bomb'.

And the absolute legend that is Reba McEntire has a new gospel collection out - it's called My Chains Are Gone and includes both her own original songs and her recordings of gospel standards including 'Amazing Grace'.

I mentioned the Hear Her Voice podcast series about women in music a few weeks ago, after its launch on International Women's Day.  Episode 5 is out today, on the theme of 'sisterhood', and it features an incredibly thought-provoking and poignant interview with Girls' Aloud's Nicola Roberts which is really worth a listen.  (There's a Spotify playlist too, curated by me!)

And there's always the Reissues By Women 2022 Spotify Playlist, which has been updated with the somewhat bumper crop of music that went through my speakers this week...