I sat down to write this blog post and neither my brain nor my computer wanted to co-operate.  What follows for this week is what I am going to call a Reissues By Women Express blog post - a whistle stop tour through some of the things I listened to and discovered this week (even though writing this felt far from an "express" experience...!). 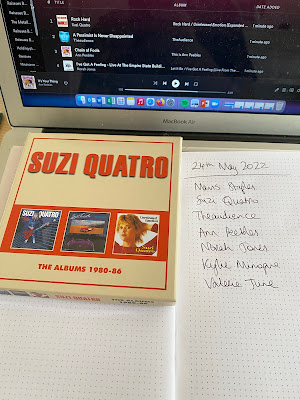 Mavis Staples and Levon Helm, Carry Me Home: Gorgeous set of cover versions from 2011 recorded at Levon's studio in Woodstock, with his daughter Amy Helm on backing vocals, including 'I Wish I Knew How It Would Feel To Be Free'.

Suzi Quatro, The Albums 1980-86: Suzi Quatro is having a real moment right now, this is the third collection of material from her very expansive catalogue in the last month or so.  A 3CD boxset, it includes 1980's Rock Hard, 1982's Main Attraction and the follow-up Unreleased Emotion.

Theaudience, Theaudience: Following the very popular Sophie Ellis-Bextor reissue series by Plastic Pop Records, Last Night From Glasgow are getting in on the action and have reissued Sophie's band Theaudience's one and only album from 1998 on vinyl, complete with 6 bonus tracks.

Ann Peebles, This Is Ann Peebles: Vinyl reissue of the 1969 album which includes her versions of the likes of 'Chain Of Fools', 'It's Your Thing' and 'Respect', originally released five years before her big hit 'I Can't Stand The Rain'.

Norah Jones, Live At The Empire State Building: To mark the 52nd anniversary of the release of The Beatles' Let It Be in the US, Norah Jones has released a 2-track EP of Beatles' covers - 'Let It Be' and 'I've Got A Feeling' which were recorded live from the rooftop of the Empire State Building in New York.  And the 4LP vinyl format of her 20th anniversary reissue of the album Come Away With Me is also out this week.

Kylie Minogue, Can't Get You Out Of My Head (Peggy Gou Remix): I have to admit, I haven't worked this one out.  There's a remix of the iconic single from Kylie's Fever album.  Not quite 20th anniversary because it was originally released in 2001, but let she who hasn't missed an anniversary moment cast the first stone.  And it's a partnership with Magnum.  The ice-cream.  And now I can't get my interest in eating a Magnum out of my head.  I guess that's how it works.

Back next week with more oomph!