There was a big Royal Mail parcel dump at our house yesterday.  Two boxes of the coffee subscription, a copy of Animals & You magazine, some electric toothbrush heads and...my awaited copy of Aretha Franklin's Sparkle from Reflex Records.  It's an indies-only ultra-clear pressing, as part of Warner/Rhino's annual 'Start Your Ear Off Right' campaign.  Available on vinyl for the first time since its original release back in 1976, this album features Aretha recording with legendary composer and producer Curtis Mayfield at his studio in Chicago.  A prime example of why I love doing this blog, likely I'd never have discovered this album of my own accord amongst the vastness that is Aretha's catalogue.  And it's a little gem. 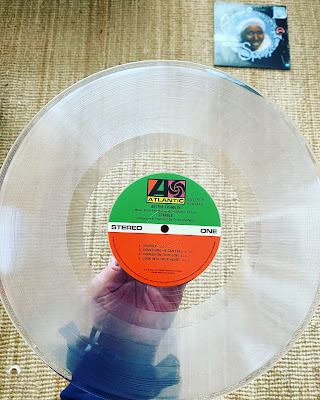 I don't think that a German language album by women has featured in this blog so far.  We've had some German language songs in some of the playlists ('Denkmal' by Wir Sind Helden from the International Women's Day playlist last year springs to mind), but this might possibly be the first time I have listened to a German (or indeed any foreign language) album in full.  Enter Carambolage, a band who it's said never set out to be a "girl band", but who were one of the first German new wave bands whose members were all female.  All three of the trio's albums have been reissued on vinyl this week - their 1980 debut Carambolage,  Eilsustellung-Expres (1982) and 1984's Bon Voyage - via Tapete Records, and I loved this from the press release: "Forty years later, it's still mostly men standing on festival stages; but the Carambolage story ought not to be consigned to the shelves marked nostalgia.  On the contrary, it is a thread which most definitely needs to be picked up.  As Julie Miess noted so succinctly in her Carambolage text 'Damaged Goods': "Role models every seven-year-old girl should have!" 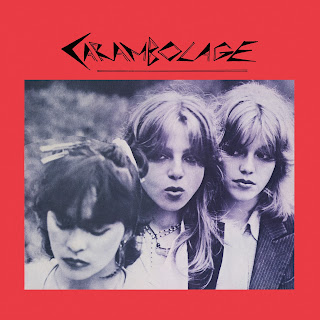 Another thing I love about doing this blog is that it has enabled me to connect with people in the industry outside of my normal working circle.  One of these is Robyn Raymond, who is one half of the Women In Vinyl podcast, and also runs (or should that be "is") Red Spade Records, which specialises in short run lathe cut records.  She's Canada's only female record cutter.  And she has just done a shortrun release with Light In The Attic Records which is a Nancy Sinatra Boots lathe cut picture disc.  Limited to just fifty copies worldwide, and accompanied by a hand-signed postcard by Nancy, it sold out almost instantly when it went up for pre-order last Friday. 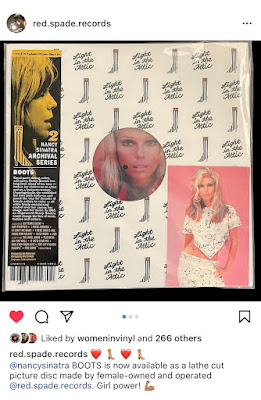 Also by Light In The Attic is the forthcoming 50th anniversary reissue of Karen Dalton's In My Own Time which comes out on 25th March.  This is a label with serious attention to detail on every level (their Leslie Winer collection was one of my favourite releases last year) and reading the description that details this Karen Dalton reissue is just breathtaking.  There's a film to accompany the release, executive-produced by Wim Wenders, and which features Angel Olsen as narrator.  And last week saw the release of Angel Olsen's cover of the song 'Something On Your Mind', as part of Light In The Attic's appropriately named 'Covers' series, with Karen's version on the b-side.  It's available on 7" and digitally.

Valerie June's fifth album The Moon And Stars: Prescriptions For Dreamers was released in March last year, and resulted in a Grammy nomination for the song 'Call Me A Fool' featuring Carla Thomas in the category Best American Roots Song.  This week sees it re-released in deluxe edition form, expanded to 23 tracks, with acoustic versions (including Mavis Staples guesting on the acoustic 'Why The Bright Stars Glow'), plus covers of Nick Drake's 'Pink Moon', 'John Lennon's 'Imagine' and Stephen Foster's 'Beautiful Dreamer'. 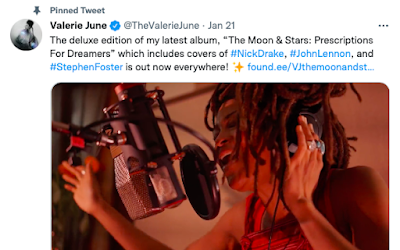 An album I pre-ordered over Christmas is The Anchoress' forthcoming expanded reissue of The Art Of Losing - her widely critically acclaimed album from last year.  Hand-signed CD versions are available from her Bandcamp and regular readers will know that I can't resist a signed copy.  Also, it's a brilliant album so I'm mightily pleased to be able to feature it here soon in reissued form.  The expanded edition is out on 4th March, and the first single from it came out this week - 'Show Your Face (Piano Version)'. 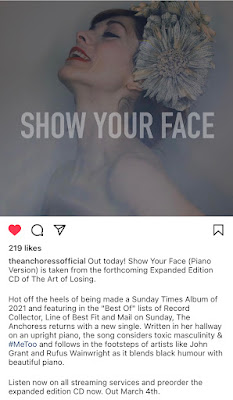 Shakira's Laundry Service turned 20 last year, and following the expanded Washed And Dried edition that came out digitally and featured on the blog in November, comes a vibrant golden yellow vinyl reissue of the original 13-track album this week.  I was feeling lucky so entered the Townsend Music giveaway of a copy.  My lucky feelings were misplaced...! 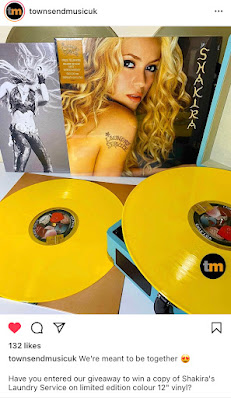 Another week, another previously unreleased PJ Harvey demo hits streaming services.  This time, it's 'The Last Living Rose - Demo', the third single to be released from the Let England Shake - Demos album which is released this coming Friday, alongside a vinyl reissue of the album itself.

Delighted to see a remix of Imelda May's 'Never Look Back' hit streaming services this week - it features in a brand new Netflix series In From The Cold out on Friday.  The original version was from the album 11 Past The Hour, which charted at number 1 in Ireland last year, and was top 5 in the UK.  Regular readers may remember me mentioning Imelda's post on social media around this time about how she had been told by people in the music industry that as a woman over 40 years of age she was wasting her time still making music. Fair to say that Imelda has proved these people wrong. 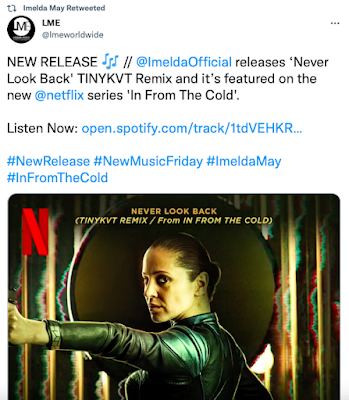 You'll find a selection of the songs from this week's blog post in the Reissues By Women 2022 Spotify Playlist.  Thanks for reading!