Following last year's gender balance research, I have once again done the counting, using the UK RSD list announced last night.  And here are the results:

This year, 28% of the list's releases include women. 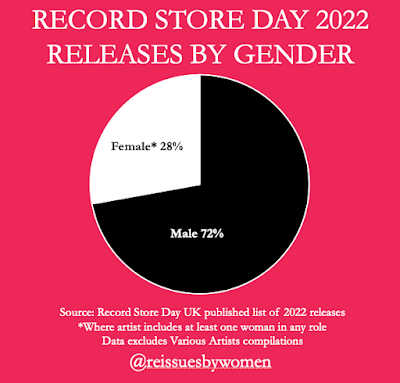 An increase of 8% on last year. 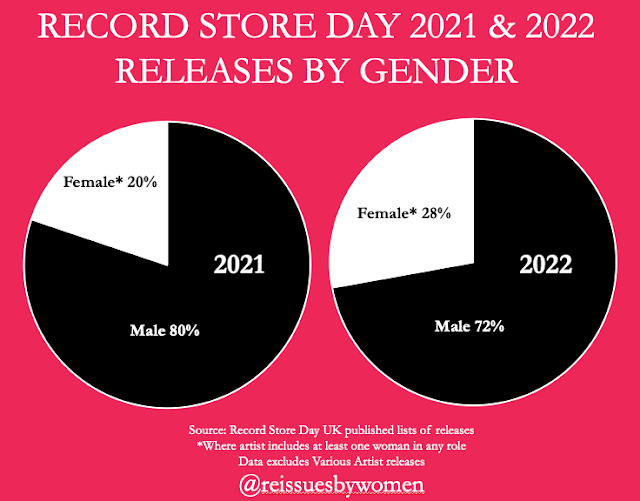 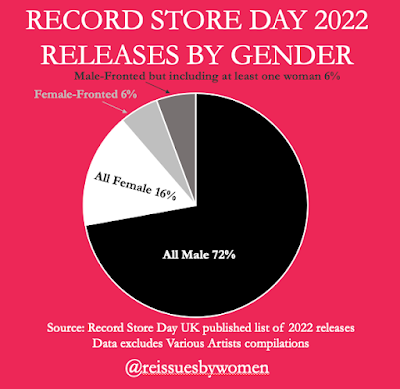 An increase of 5% on last year. 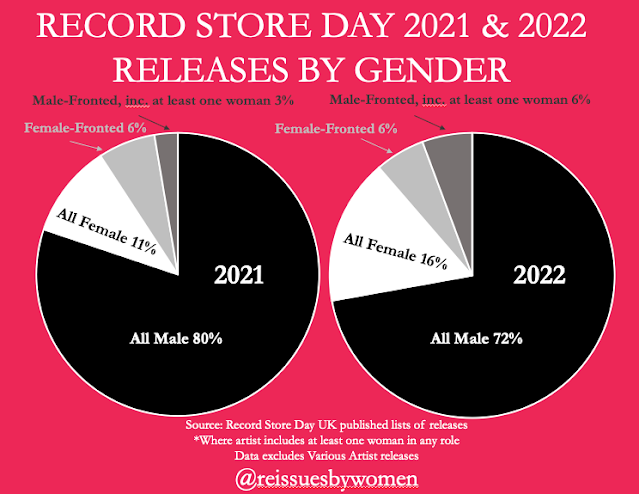 I was hopeful that things might improve on last year, but I wasn't confident of it.  So to see the change quantified is incredibly uplifting.  I know that the Entertainment Retailers Association (ERA) team in the UK are very active when it comes to promoting diversity, and actively calling out the need for those submitting releases for RSD to be considerate of gender balance in their release curation.  Worth mentioning though that this change hasn't really come about in just one year.  It's at least three years since I started talking about the disparity, and likely I wasn't the first to observe or comment on it. And ERA have been flagging it to those submitting releases in previous years too.  But it would seem that this message is finally getting through.

I was conscious last year not to single out any labels as being better or worse than another with their gender balances.  However, this year I'd like to share my experience of being part of the UMC A&R team which co-ordinates the proposals and project management for Universal UK's catalogue releases for Record Store Day.  UMC have gone from near the average 20% mark in terms of female artists, to just shy of 40% this year - as a result of combined and deliberate efforts from those of us submitting ideas and those in charge of the shortlisting process (shout out in particular to Chas Chandler who manages the list for UMC A&R).

I was also conscious last year that I was making statements about a gender imbalance when my own involvement in RSD releases was exclusively for male artists.  This year, I am delighted that my own balance in terms of releases that I had a role in either proposing or project managing is 60/40 in favour of women.  And there were multiple other releases by women that I proposed which got a green light but didn't work for the artists/managers this time around - which is a good reason not to put all the blame for imbalances at the door of the labels.

That said: Labels, if you need consultancy services on how to improve the gender balance of your RSD release list, I am available!

I'd love to think that the improved balance seen in this snapshot may start to filter out to other areas of the industry, including the weekly marketwide release schedules, box set decisions, and the priorities for marketing.  I will be keeping an eye!

Those of you who have been reading the blog since last year will remember that for Record Store Day itself the blog featured some guest contributions from readers and friends about the reissues by women they had chosen for RSD.  So I am putting it out there now - if you are planning to buy a reissue by a female artist, or indeed if you have been involved in a reissue by a female artist for this year's list, and you'd like to contribute to the RSD feature in late April, please get in touch! (hello@reissuesbywomen.com or DM via Instagram or Twitter)