It's not every woman who can take on a Led Zeppelin cover version, never mind a whole album of them.  But listening to Beth Hart's new release, A Tribute To Led Zeppelin, I think I'd have to conclude that I am not sure there is any woman more suited to this repertoire than she is.  I first encountered Beth back in 2006, when she supported Jeff Beck on tour in the US.  I was working as part of Jeff's management team at the time, but London-based so we never met.  So I was pleased to have this catalogue project of sorts to reconnect with her sound this week.  The versions are faithful to the originals and the sheer power and force of her vocals is quite something.  It's got all the songs you'd expect - opening with Whole Lotta Love, then into Kashmir and Stairway To Heaven, as well as Black Dog and When The Levee Breaks.  Loved it. 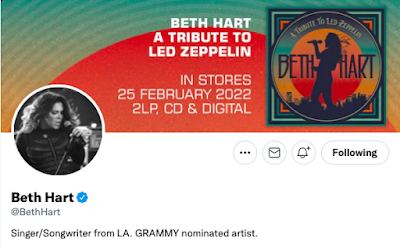 Following Sheena Easton's The Definitive Singles 1980-1987 which featured on the blog last September, comes a deeper look at her album A Private Heaven from 1984 which has been expanded and reissued as a deluxe 2CD package this week by Cherry Red.  Although I was familiar with the singles (and important to mention that 'Strut' was Grammy nominated and a US #1 Dance hit), I wasn't familiar with the album itself.  And I was most pleased to discover a cover version of Joan Armatrading's 'Love And Affection' which is one of my favourite songs of all time.  The collection has b-sides, remixes, alternative versions and instrumentals and features extensive liner notes on the album, including the story of single 'Sugar Walls' and how it came to be written by Alexander Nevermind (aka Prince). Announced this week was Norah Jones' 20th anniversary reissue of her mega-hit album Come Away With Me.  I remember vividly when this album came out, I owned the original CD (pictured below for nostalgia) and it was one of those ones that I not only played non-stop, but also bought multiple copies of and pressed into the hands of friends.  I recall it feeling very grown up to the twenty-seven year old me.  I wonder what the 44-track expanded edition will feel like to the forty-seven year old me?  I'll have to wait until 29th April for the full revisit, but in the meantime, a gorgeous alternate version of the title track has been released digitally. You'll find it in the Reissues By Women 2022 Spotify Playlist, along with a selection of the rest of this week's tracks. 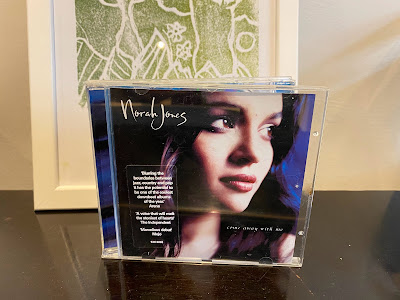 I definitely felt less grown up when Madonna's 'Don't Cry For Me Argentina' came out twenty-five years ago.  Her 1997 single from the soundtrack to the movie Evita was reissued digitally this week in a 9-track EP which features seven variations on the Miami Mix of the song.  My favourite is the Spanglish one! 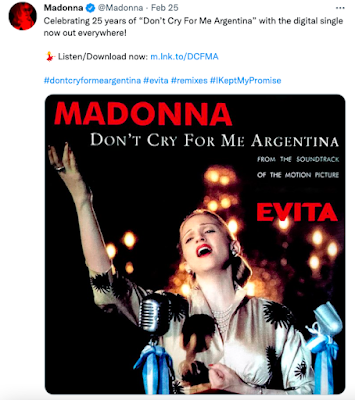 I had been expecting to receive my limited edition 30th anniversary 7" single reissue of Shakespears Sister's 'Stay' this week, but they emailed to say it's been delayed by a few days.  Hopefully here in time for next week's blog post and I'll share pictures on Instagram.  It comes with a signed lyric sheet!

And I know to some readers it probably feels like I am always banging on about Record Store Day (I do love RSD, in fairness!), so I was somewhat saddened and frustrated by the recent Guardian article 'Record Store Day is harming, not helping, independent record shops like mine' which I referenced at the end of last week's blog post.  This week, though, Banquet Records in Kingston have shared some of their thoughts on Record Store Day as a sort of counter-argument to that Guardian piece and it's a really positive read (here on Instagram if you haven't already seen it).  I've already started thinking about reissues by women for RSD 2023...